A “glide path” seems like such a comforting metaphor within the otherwise abstract and sometimes confusing terminology of investments, traditional or alternative. “Glide path” suggests that the possession of enough money for the serene enjoyment of one’s golden years is a matter of arranging a slow and untroubled descent onto the tarmac of an airport.

A new study, produced as part of the BNP Paribas Investment Partners research chair on at EDHEC-Risk Institute, looks into asset-liability management from the point of view of the control of both short-term loss aversion and longer-horizon risk aversion. Its key point is that those are two different things, and that failure to distinguish between them can lead to significant opportunity costs. Along the way, it picks something of a quarrel with advocates of glide-path portfolios.

The cost of insuring against threats lessens as the time horizon becomes more myopic. Consider especially the goal of assuring the owner of a portfolio that his wealth shall not fall below a certain specified floor. This is the task illustrated by the two panels below, taken from the report. The top panel shows the costs of optimal insurance as a function of risk aversion (and on three different assumptions as to initial wealth and ‘floor,’ coded by color) given a 10 year horizon. The bottom panel shows the same three lines, given a 20 year horizon. The lowering of all the curves is consistent and dramatic.

Figure 1: Cost of Optimally Managing the Insurance as a function of the Risk Aversion 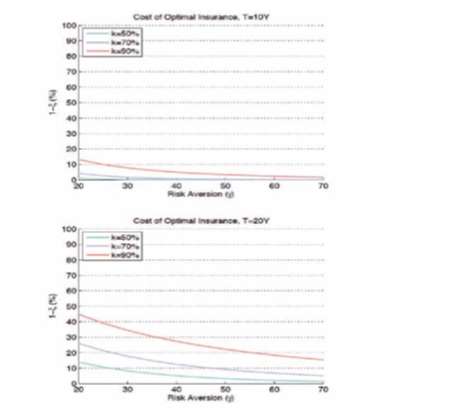 As a generalization, one that may be drawn from a large body of empirical literature on portfolio decisions, equities themselves serve as a hedge against unfavorable equity returns in the presence of mean reversion.  As the authors of this report put it, “the correlation between realised equity returns and expected equity returns is strongly negative.”  Thus, the optimal allocation to equity is higher for longer-horizon than it is for more myopic investors, and rational investor behavior varies predictably.

This determination has itself been institutionalized with the creation of glide path or “life-cycle” funds.  As an individual investor in such a fund approaches his retirement date, his own concerns about risk naturally become more short term, so a deliberate myopia is adopted over time, and the equity allocation within the portfolio of the fund tailored for that individual decreases.

But the authors contend that such a glide-path is not the optimal approach. Often it isn’t even possible. Even for institutions with the longest-possible horizons, there are short term accounting constraints that operate at any given moment, due to “accounting and/or regulatory pressure, political pressure, peer pressure, etc.” In the specific context of private wealth management, investors often impose upon themselves maximum drawdown constraints.

Unless one takes explicit account of the fact that both long term and short term pressures exist at any given moment, these authors write, “the weight allotted to performance assets [generally, equities]” will be reduced to a degree that will have a negative consequence.

An optimal strategy is one that treats the insurance aspect of a portfolio in a quantitative and explicit way, pricing in an insurance put and computing its deltas.

This optimal strategy will be one that includes both a performance seeking portfolio (PSP) and a liability hedging portfolio (LHP). The novelty in the approach suggested by this paper “is that the allocation to PSP versus LHP is also a function of the risk-budget” expressed as the distance between the asset value and the floor. In the terminology of constant proportion portfolio insurance (CPPI) this distance is known as the cushion.

When the cushion disappears the allocation to PSP goes to zero, “as it should” the authors comment.

The authors are: Romain Deguest, Lionel Martellini, and Vincent Milhau. Deguest is a senior research engineer at EDHEC-Risk Institute. Martellini is professor of finance at EDHEC Business School and is on the editorial board of the Journal of Portfolio Management and the Journal of Alternative Investments. Milhau is deputy scientific director of EDHEC-Risk Institute, with degrees in statistics and financial mathematics as well as finance.