Japan has become a very attractive place to invest in recent weeks. It is something akin to a great river with a lot of fresh meat floating about, and as yet relatively few piranhas benefitting from that environment.

Japanese stocks have been on the upswing.  Back in September, when former Prime Minister Shinzo Abe became again the leader of the opposition Liberal Democratic Party, the Nikkei 225 was at 9,000. It began a steady rise in mid-November, after then-Prime Minister Yoshihiko Noda dissolved the Diet and called for an election. The LDP won a majority in that election, in mid-December, and Abe accordingly became the new PM. The bullish move in the stock market began while those events transpired.

GFIA, in its Research Insights newsletter for March 2013, highlighted Japan in a detailed “quant research piece.”  GFIA contended that “from an allocator’s perspective, this is a market representing the world’s third largest economy, arguably its most innovative economy with over 3,000 listed stocks, of which, conservatively, there might be sell-side coverage of 25% and a minimal community of alpha seeking investors.”

The newsletter classified Japan-focused hedge funds into three groups: long/short, long only, and market neutral. It is an unequal division: the long-short class dominates, as 69% of the whole. 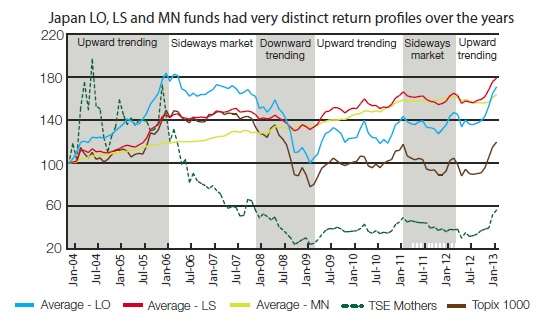 HF versus Topix or Mother

As you can see in the chart above, all of the three classes of hedge fund outperformed the relevant index, Topix 1000, (the brown line) in the period under scrutiny, from January 2004 to the present.  Also, all of the lines except that reflecting the market neutral strategy show a sharp uptick on the right hand edge of the graph, reflecting the ascension of Prime Minister Abe and the aggressive policies of the Bank of Japan.

Even the TSE Mothers index (the term is a creative acronym for the Market Of The High-growth and EmeRging Stocks) which was pounded early in this millennium and has languished in a self-defined basement through the last three years, shows a marked uptick of late.

But perhaps the meat in this river is perhaps best sought by managers working from a distance. Managing a Japanese hedge fund from within Japan can be a challenge.

I spoke to Peter Douglas, the founder and principal of Singapore-based investment consultant GFIA, about a range of Japan-related questions after reading this newsletter.  He told me, “The Japanese regulatory and policy system distrusts small financial-services businesses. The prevailing wisdom (or lack of it) believes that big = safe, in the financial sector.”

Officialdom in Tokyo has tried to show of late that it wants a somewhat more free-wheeling approach to financial capitalism. On April 1, 2013, for example, the Financial Services Agency published a draft comprehensive review of its short selling regulations.  It proposes, for example, streamlining public disclosure procedures and revising the uptick rule to make it less onerous.

It would be a mistake to read too much into this. Douglas said:  “Technically short selling has not been particularly difficult in Japan for some time, and often very rewarding for managers given the long bear market. In their boots, though, the authorities feel that short selling is dodgy and not really what they want to encourage.”

One perennial discussion about Japan (among interested westerners) is whether the corporate culture is hostile to outsiders and makes profitable investing difficult. This old concern has been raised by some in recent years in the context of corporate activism as a style of investing. Can activists make a profit in that market?

“In an age of substantial corporate restructuring, activism has been, and continues to be, a good strategy in Japan, with some caveats,” Douglas said. If it is attempted in the hostile style often adopted in New York City or London it will create obstacles, because “the establishment closes ranks, as Chris Hohn and The Children’s Investment Fund discovered when they tried that approach at J-Power” in 2009, he added.

A better strategy, though, is to find a door that’s ajar, knock politely, and see if one can push it open a bit further. For example, a parent corporation with a number of subsidiaries may have a chaotic capital structure, and there may well be money to be made by streamlining and  rationalizing that structure.

In that case, the would-be alpha piranha might do quite well if it doesn’t. well, … act like a piranha.