According to Barclays, the hedge fund industry is still growing, but at a slower pace. It is now a mature industry, concentrated into fewer and larger players over time. The space now (as of 2012) has total AUM of a little under $2.3 trillion, but over the period of the preceding three years this growth had been driven more by performance than by net inflows.

Sixty-five percent of the AUM is held by just 108 managers.

That doesn’t mean that these are the days of wine and roses even for the managers of the largest players, the biggest goldfish in the bowl. Life for them, Barclays says, is “surprisingly challenging,” as indicated by the very high turnover in the names on the top 20 list.

In 2002, the top 3 firms ranking by AUM were Caxton Associates,  Andor Capital, and Cerberus., None of these three was still on the top twenty list in 2007.

In 2007, the top three were: JPMorgan (Highbridge), Farallon Capital, and Bridgewater Associates. Highbridge and Bridgewater were both new to the top twenty list. Citadel Investment Group was fourth by AUM in 2002. It had fallen to 14th five years later, and had dropped off the top-20 list entirely by 2012. 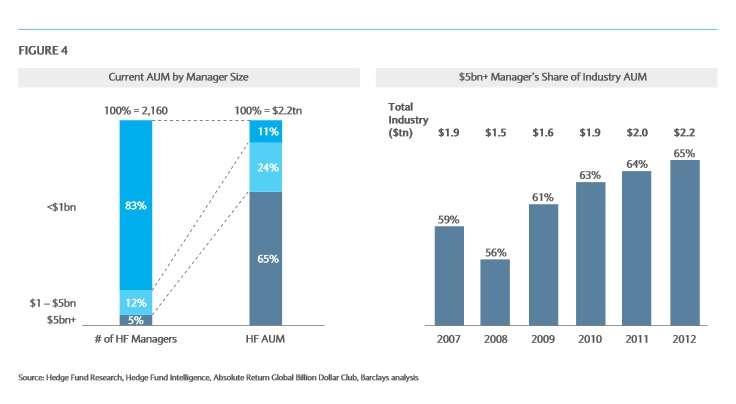 At any rate: another key point of the report is that there are four broad strategies toward growth: product specialists (PS); asset class specialists (ACS); multi-strategy managers (MSM); and diversified alternative asset managers (DAAM).

These terms mean what it sounds like they mean. Product Specialists, by virtue of their focus on a narrow range of products and investment strategies run lean organizations. Their focus “helps them to simplify operations and the marketing message.”  Asset class specialists seek to brand themselves as the go-to managers for the clients’ needs within their area of focus. Multi-strategy firms end up with a “more complex and costly organization” that either of the two classes of specialist, but they don’t face the cyclicality problem that the specialists can. Finally, DAAMs not only offer a variety of HFs, they often offer products outside of the hedge fund ambit. The problem is that they may often have “too many sub-scale products” in the mix.

These four classes result from distinguishing between a “narrow” and a “broad” approach along each of two axes: products and expertise. The least popular approach to growth is that of the MSS: with broad expertise but a narrow range of products. Only 15% of the firms in Barclays sample fit that description. In 2007, only 10% did. The most popular strategy is that of ACS, with a broad range of products but a narrow expertise.

Once in a while in a world of transience, a fund will change its growth model.  Barclays says that 43% of “the managers in our sample have at some point changed their business model.  The trend is generally in the direction of greater diversification of one sort of another: broader products, or broader expertise, or both.

There is a relationship between portfolio strategies and growth strategies. Some PS’ are more likely to remain PS’ than others, based on the particular portfolio expertise.

“The strategy most likely to stick to their original model in our sample was CTA/Managed Futures.” They can grow in ways that don’t require broadening either expertise or products, that is, they can move into new and more liquid markets within the very large managed futures world and this can remain PS’.

Equity and credit managers who start as PS’ often make the transition to ACS’ “drawing on their good reputation within the asset class to launch new products in the same space.”

But consider the simplest case: a PS (of any specialty) that grows within its existing product.  Even here, there are execution/capacity issues that come with growth and Barclays cautions managers to plan for them.

The study looks at the difference between hedge funds that doubled their AUM within the course of the preceding two years and hedge funds that didn’t. Since 2006, this difference has been negative: that is, the fact of doubling is a drag on performance. Barclays attributes this to failures in addressing capacity issues.

The gist of the report is simply that hedge funds cannot grow in a sustainable way unless they have and execute a well thought out strategy. This means deliberate choices, not just “doing the same thing, just with more people and capital.”