Signs of a Renaissance in Emerging Manager 'Alpha'

The recent announcement by CalPERS, the largest pension fund in the world, that it was exiting entirely from hedge funds has led many to speculation that this heralds the end for hedge funds. However, the recent fund flows data tend to refute this and suggest that there are still signs of life for Hedge Funds and even for smaller funds and Funds of Funds.

In the first instance when we look at the particular case of CalPERS it quickly becomes evident that the main reason they are exiting hedge funds is not so much performance or cost related, although costs do remain a factor, but primarily because of their size.

With assets under management (AUM) of $300 bn, the $4 bn exposure to Hedge Funds CalPERS currently has is less than 2% of the portfolio and is not large enough to make any meaningful impact on either performance or diversification.

Given only 200 of those will have above average performance at any point in time you can see that their probability of CalPERS' hedge fund portfolio outperforming the average for all hedge funds declines rapidly unless they have a near perfect hit rate of picking winning funds.

**Note: ASSUMES all funds have equal AUM of $1bn which they obviously do not. The distribution of AUM is roughly Paratean (80:20) so the number of funds required would be about 20% lower than stated above.

Although the negative psychological impact of CalPERS quitting hedge funds is undeniable the most recent hedge fund flows data from HFRI shows that hedge funds attracted a net $30bn in new capital for the six months to end June of 2014 alone. Since Jan on 2010, Hedge Funds have attracted $255bn in new assets, mainly from institutional investors, against which the CalPERS number pales into insignificance.

Moreover, even the much unloved fund of hedge funds sector has finally stopped haemorrhaging assets and showed a net positive flow of $500m in the first two quarters of 2014. This comes after losing over $200bn in assets since 2007 - most of which it appears was switched into direct single hedge fund exposure rather than elsewhere. Total Hedge Fund Assets ( Hedge Funds + Fund of Funds ) of $3.4Tn are 30% higher than their pre 2008 levels of $2.7Tn. None of this suggests a sector that has fallen out of favour although it is fair to say that there has been significant concentration into the larger funds.

This is somewhat ironic because as the update of some research of mine on Do Emerging Managers add value shows, Emerging Managers* have once again started to outperform their larger brethren.

The excess returns ('Alpha') of Emerging over Established managers tend to range between -2% to +6% with the cycle corresponding largely with the market and economic cycles with some lag.

The recent dip in Emerging Manager Alpha can probably be explained by consolidation in the fund of funds space and concerns about pending legislation adversely affecting new issuance / fund launches as well as an institutional flight to quality response to the GFC that saw larger investors shy away from smaller funds in favour of the 400 or so funds with AUM of over $1bn.

Whilst it is possible that the data simply reflect a case of a rising tide lifting all ships, the fairly consistent levels of Emerging Manager 'Alpha' measured by myself and others even after allowing for database biases like survivorship tell a fairly compelling story that Emerging Managers do add value. 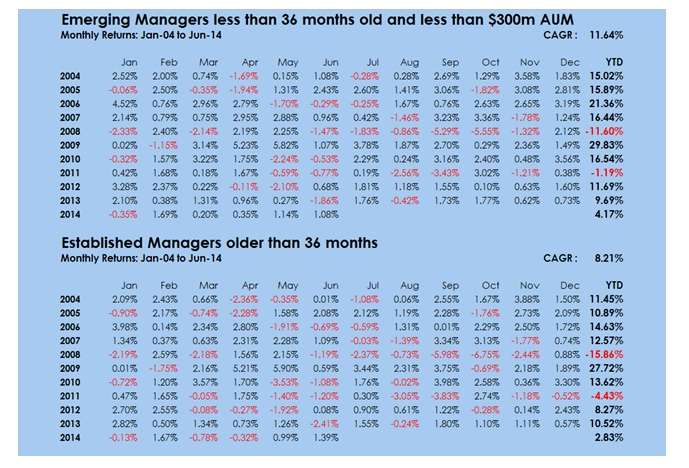 For the full presentation.