Pension Funds as Alternative Investors Get Some Advice 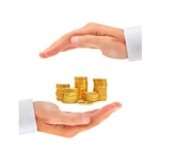 The Alternative Investment Management Association and the CAIA Association have together published an educational paper offering pension fund trustees practical guidance on hedge fund investments, their advantages, and the associated challenges.

This paper, “The Way Ahead: Helping trustees navigate the hedge fund sector,” is the first in a projected series to be prepared by AIMA and CAIA for the benefit of such trustees and other institutional-investor fiduciaries. The other papers will involve alpha strategies, transparency, and governance.

But What About This One?

The first paper in the series makes the point that roughly one quarter of the money managed by the global hedge fund industry has been invested there either by private (15%) and or public (9%) pension plans. The pie chart below, adapted from one in the report, indicates as much. Fully three quarters comes from institutional investors.

As the CEO of AIMA, Jack Inglis, said: “[M]any trustees are asking questions about their existing or prospective hedge fund allocations. Rarely has there been such demand for a realistic assessment of the benefits – and also the risks – associated with hedge fund investing.” 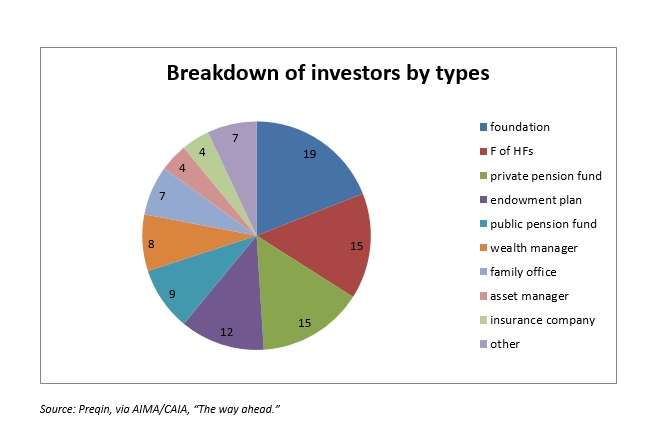 By way of kicking off the longer series in order to satisfy that demand, the first paper highlights the following facts:

Another pie chart, adapted below, shows the various impediments that institutional investors say keep them from investing in hedge funds. Preqin asked respondents to name the single largest impediment, and the answers broke down as shown.

The most frequently cited biggest impediment is the difficulty in sourcing. The report acknowledges that not every pension plan, or investor generally, has “the internal resources or experience to make the best informed decision about which fund(s) are most appropriate to meet their risk and return requirements.”

Those pension funds that do move into this space often do so with the aid of a third party who helps tackle due diligence and manager selection, a consultant or fund of funds manager. 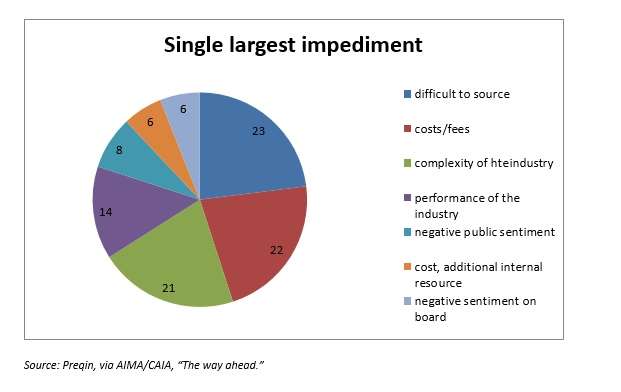 It isn’t merely opacity that is a problem. The problem, for those who want to do the DD right, can be quite the opposite, information overload. In that case, the use of professional risk aggregation and reporting platforms can help.

Part of what is, and reasonably ought to be, on the mind of a trustee considering whether to make a particular hedge fund allocation is the issue of “headline” or reputational risk. No one wants to allocate a portion of their portfolio to a hedge fund company only to see its star trader indicted the following week for, say, insider trading, with the lurid headlines that brings.

The AIMA/CAIA paper offers some assurances on this point: “Recent regulation and adherence to industry sound practices have considerably strengthened investor protection and provided for greater transparency.” Furthermore, pensions can structure their hedge fund investments so as to reduce their exposure to operational risks “below those faced in retail fund products.” The managed account structure lets the investor control the cash and assets and valuation.

The paper also says that AIMA and CAIA have noticed “a change in the way hedge funds are being used by institutional investors.” They might once have considered hedge funds as one asset class, or “pot” within their portfolio, assigned a particular percentage number to that pot, and then concerned themselves with divvying up the space therein. This makes some sense if hedge funds are chiefly regarded as a provider of diversification.

But … if hedge funds are also regarded as the means to access “expertise in specific or esoteric investment opportunities that may not be readily available to them otherwise,” the investor can and should see through the funds to the strategies and assets accessed. Institutional investors are becoming more sophisticated in this respect over time. That is a theme to be exploited more thoroughly in the later papers in the series.