The Case Against a Bearish Argument on Crude Oil 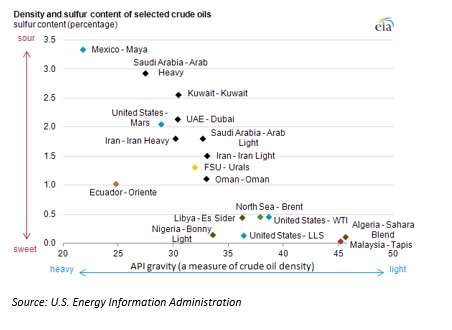 A recent Bloomberg story indicates that in a world  awash in cheap crude oil, traders are now storing the stuff at a loss, at sea, on board vessels in the Straits of Malacca. Further, they are going into debt so they can bear this loss.

Citing Morgan Stanley analysts, Bloomberg indicates that storing oil for one month nets out to a loss of $0.48 a barrel.  The cost per month rises as the length of the “storage arbitrage” increases, so that six months of storage loses more than a dollar per barrel per month, or $6.11.

This, if true, is of course bearish news for the price of crude. Prices were above $100 less than two years ago. How far off that seems now! They fell to below $50 in January 2015, then recovered somewhat, spending the early summer of that year above $60. Then they suffered another impressive bear run,   to get as low as $28.55 on January 18, 2016.

Since then there has been another bounce, and Brent is now selling right at the $50 mark.

But, if traders are losing money by storing it at sea, aren’t they certain to unload those ships when they have the opportunity, bringing an end to their losses and in the process sending the price back down to or through the $30 mark again?

It would seem so. But there is an important counter-argument to be made here. It is possible the reliance on Brent prices for the profit-or-loss calculation on storage arb simply misses what is going on, and that the parties doing the storing aren’t really losing money at all. The sometimes missed point is that oil isn’t ideally fungible. If the oil stored in the Straits of Malacca isn’t the grade of oil that is traded at Brent, then it will sell more cheaply, and it may well make sense to store it.

Oil is typically classified in two ways: by viscosity and by sulphur content.  Thus, one gets the two-dimensional grid displayed above.  Low viscosity (or light) crude is more valuable than heavy crude, for the obvious reason that the more viscous stuff is trickier to move through a pipeline, more costly to get where one wants to make use of it.  Lightness in this sense corresponds to API gravity – that is, to whether oil of a particular grade can float on water. West Texas Intermediate and Brent Crude are both considered “light” although WTI is a bit lighter, as the above chart indicates.

Both Brent and Texas oil are quite sweet, too: that is, low in sulphur content. That is a valuable characteristic, because as the U.S. EIA puts it, sweet crude “can be processed with far less sophisticated and energy intensive processes/refineries.”

The hypothesis that the oil in those vessels is not Brent quality certainly makes intuitive sense. After all, as Craig Pirrong put it, “oil traders operate on very thin margins. They are not going to make uneconomic trades. …If they are storing oil on ships in Singapore, it is because it pays to do so.”

Climbing a Wall of Worry

These reflections may bolster some bullishness about oil prices. If the traders who own the oil in those straits aren’t losing money on those trades, they aren’t desperate to unwind them, so there is no great supply of crude waiting to come into the market and nip a rally in the bud.

But, as is often said, rallies must climb a “wall of worry.” Somebody has to be moaning that the rally is short0-lived, that it is a trap, etc. There have to be bears.

In late March of this year, when oil had risen from its low of January but was still below $40, Asterick Capital was explaining that the rally was “doomed to fail,” largely because Iran was returning to the market.  It wasn’t doomed.  At least, not just then.

Actually, Iran is a better reason to worry about this rally than are those traders in the oil floating in the Malacca Straits. But it’s a longer term concern: Iran’s post-sanctions return is a slow clumsy process.

When nobody is a bear anymore: that’s the moment when you’ll want to be a bear. Until then, stories such as this from Blomberg may be a good omen. The rally has not yet run its course, precisely because of the range of arguments that are out and about concerning how thoroughly doomed it is.