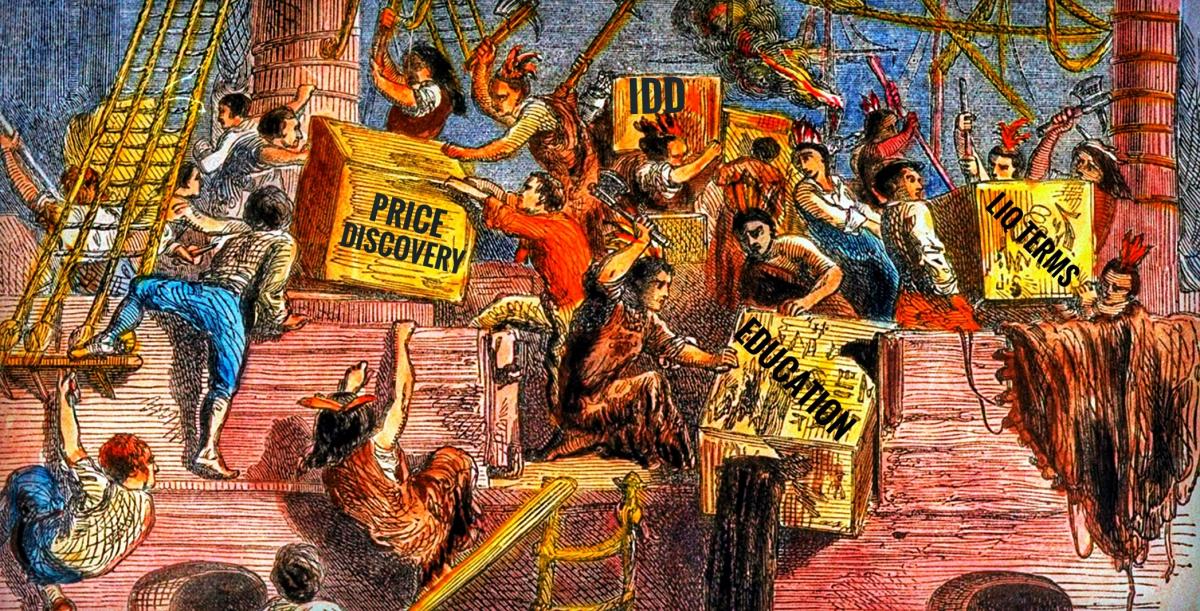 The American history buffs out there will know that we are just a few short weeks away from the 246th anniversary of the Boston Tea Party. Back in 1773, the British government was deep in debt and decided the very best course was to tax their way back to solvency (Get ready to see that movie again soon!). The Colonists were not happy with a series of new levies and we soon found out what happens when you mess with someone’s tea. The protest was likely the tipping point that ultimately led to the American Revolutionary war. The battle cry back then was “taxation without representation” as the Colonists hacked open 342 chests of tea (imagine the irony if it were 2(and)20!) and dumped the contents into the dark waters of the Boston Harbor.

What were the American founders really trying to tell us? Of course, no one likes paying taxes, but the bottom line was maybe about the consequences of exposing a populous to something, without the adequate alignment of interests. Perhaps a historical parallel and perspective can be drawn as we look at the evolving role of the accredited investor, soon to be played by the understudy Joan Q. Public repping the Colonists. As for the modern-day role of the protagonist, look no further than the SEC, and this time around it is more about democratization without education.

What About Beta has previously covered the tale of two equity markets (see Spoti-sly) and the problematic allegory therein. The PE market has truly become the new home for capital formation, as the public version is increasingly about liquidity being sought at the more mature phases of a company’s growth. Equal access for all would seem both fair and warranted, but it is much more nuanced than the simple tweak of a definition to grant entry to a broader pool of individual investors. Price discovery, performance dispersion, liquidity, and the art and science of due diligence are not for the faint of heart, and then we learn that surveys show 99% of Americans are not even using any form of a financial advisor!

Protecting the investor has long been about granting less not more access, particularly when it comes to bringing very sophisticated alternative investment products into the hands of the masses. We saw the well-intended, post-GFC advent of the liquid alt product suite meant to provide greater access to certain forms of risk premia previously available only to the institutions and HNW crowd. Rather than deal with the complexities of explaining concepts such as Sharpe ratios, drawdowns, standard deviations, and kurtosis (you better see CAIA if that word is not in your vocabulary), it was simply easier to skinny down the value proposition and tuck a solution into a daily priced wrapper connoting ease of liquidity, for something that was meant to be held for the long term.

And so it now goes with private equity…education is hard, but then again, most things in life worth doing are never easy. Our industry should address this problem in a wholesome way which should begin by understanding all facets of greater private equity access, along with the related opportunities and challenges. This very topic has been back in the news of late in light of recent meetings and corresponding priorities coming out of the SEC’s Investment Advisory Council. It’s a complicated issue that has both interests and self-interests at the center of the debate; in the latter case a recent quote in a P&I article by a respected industry trade association was puzzling and shows the level of resistance for some already breathing the rarified air of the private markets.

We should absolutely keep the discussion going especially as the larger pools of assets continue to shift from the sophisticated hands of the institutional DB managers to the less sophisticated individuals trying to navigate the complexities of investment and longevity risk embedded in the DC wrapper. Let’s lead and solve with education and transparency. That approach is certainly more complicated, yet much more sustainable as we make democratization via education our modern-day battle cry. Let’s learn from this tea-flinging ancestry, as this time it is ignorance and opacity that we throw overboard.

Seek diversification, education, and know your risk tolerance. Investing is for the long term.