Working in the restructuring team of a corporate finance boutique is like being a trader focused on short-selling. Most money is made when companies falter, and stocks turn bearish. A restructurer’s cyclical counterpart is the ever-optimistic merger & acquisition (M&A) banker that thrives when the economy is booming and companies trade at their all-time highs, which in turn allows them to use their overvalued stock as cheap acquisition currency.

The coronavirus crisis has not only put M&A activity on hold, but also has led many mergers and acquisitions to fail. Xerox abandoned its $34 billion hostile bid for HP, Softbank canceled its $3 billion offer for WeWork shares, and private equity company Sycamore Partners is trying to get out of its $1 billion acquisition of lingerie and beauty product maker Victoria’s Secret.

Betting on M&A activity by buying the shares of the company to be acquired and shorting the acquirer’s stock is a classic strategy employed by hedge funds, commonly called risk or merger arbitrage. The long leg of this trade, acquiring the target, pays because investors tend to underestimate the probability of a deal closing. Shorting the acquirer, on the other leg of this trade, pays because the acquirer is using overvalued equity that will go down in value, in part because of the signal the very same merger sends to the market. These two trades, put together, provide a unique source of seemingly riskless profits. When this strategy is deployed over a large number of deals, the market-neutral profile of simultaneously being long and short stocks lowers drastically its correlation with equity markets and makes it an attractive vehicle for diversifying a traditional equity-bond portfolio.

However, as seen during the current coronavirus crisis as well as during the great financial crisis from 2008 to 2009, many deals fail when stock markets crash, which might make the strategy less uncorrelated than allocators expect, and in the worse possible moment.

In this short research note, we will explore merger arbitrage as an investment strategy.

THE POPULARITY OF MERGER ARBITRAGE

Research has shown that the returns of trading strategies are far lower in reality than in backtesting, which is either due to overly optimistic (non-realistic) model assumptions or returns getting arbitraged away by traders once the strategy has become public knowledge.

While estimating capacity for an investment strategy is a bit more of art than science, most investors will agree that some strategies like value investing have a large capacity for assets while others like statistical arbitrage are more limited.

The global M&A deal volume in 2019 was above $4 trillion according to Dealogic, but the capacity of merger arbitrage is estimated to be just a fraction of this. The strategy entails investing in stocks that trade slightly below their proposed acquisition price, where liquidity is typically constrained. Furthermore, deal flow varies significantly over time, which limits the capacity. Finally, there is a well-documented trend showing a constant decline in the number of listed equities worldwide, mainly due to M&A activity, which in turn decreases the investment universe for merger arbitrage strategies.

We observe that the assets allocated to merger arbitrage hedge funds enjoyed consistent growth in the period from 2011 to 2019 and reached $72 billion last year. The assets under management in the hedge fund industry have more than doubled since 2011, but tripled in merger arbitrage, highlighting the popularity of the strategy. 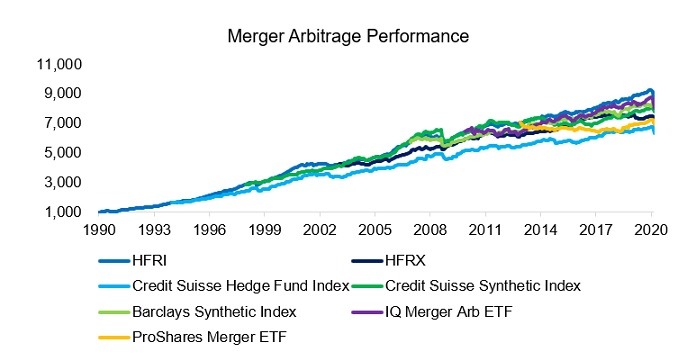 The performance of merger arbitrage can be measured via various indices, some of which provide daily and others only monthly return data. We can distinguish indices into the following categories:

We observe that merger arbitrage generated relatively consistent returns between 1990 and 2020. Although the total returns of the indices vary, the trends in performance have approximately been similar. However, we also observe drawdowns during the global financial crisis in 2009 as well as during the coronavirus crisis in 2020.

Historically merger arbitrage has been exclusively the domain of hedge funds, but has become accessible to all investors via low-cost bank indices and ETFs. Given this, allocators might question if hedge funds indeed offer better risk-adjusted returns and justify their high fees. There is no public information on how much capital has been allocated to bank indices, but merger arbitrage ETFs manage approximately $700 million, which is 1% of the capital allocated to hedge funds.

We analyze the period from 2009 to 2020 as the first ETF dedicated to merger arbitrage was launched in 2009. We observe that hedge funds, bank indices, and ETFs shared the same trends in performance, but the CAGRs range from 1.0% to 2.6%. The S&P 500 returned 10.8% per annum over the same period, however, let’s keep in mind that merger arbitrage should not be benchmarked to equities given that by construction it is a market-neutral strategy.

It is worth noting that the performance of merger arbitrage hedge funds exhibited smoother returns than bank indices and ETFs. However, hedge fund indices are subject to a variety of reporting biases that tend to overstate returns and understate volatility, which needs to be considered. 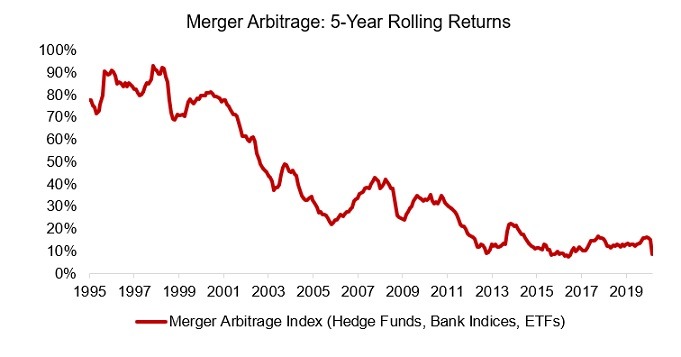 Given that the assets allocated to merger arbitrage are at an all-time high, investors might question if the alpha is still positive. We calculate the five-year rolling returns for an index that includes all merger arbitrage products, which highlights returns that have been consistently declining since 1995 and is likely explained by too much capital chasing too few deals.

However, the five-year rolling return has been approximately 10% in recent years, which is still highly attractive, assuming the strategy is uncorrelated to traditional asset classes like equities. 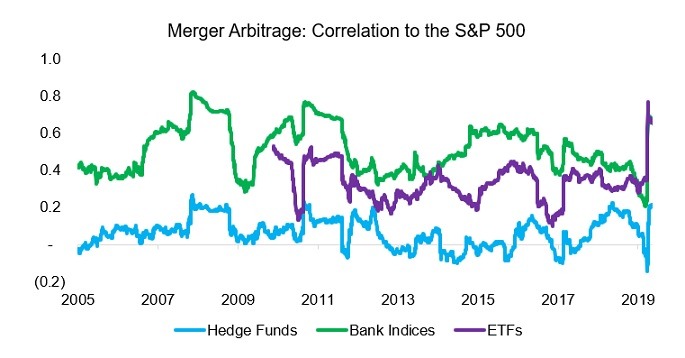 Measuring the correlation of merger arbitrage to equities over the last 15 years reveals that hedge funds offered significantly higher diversification benefits than bank indices or ETFs. The average correlation of hedge funds to the S&P 500 was 0.1 using daily returns, which theoretically makes the strategy highly attractive for diversifying a traditional equity-bond portfolio.

However, although mathematically correct, this low correlation should be viewed with skepticism. The performance of merger arbitrage hedge funds and bank indices was approximately the same and yet the correlation of bank indices to the S&P 500 was 0.5 on average. Hedge funds might seem the better choice (similar return, lower correlation to equities), but that is likely due to flawed data featuring reporting biases like self-selection.

Furthermore, using monthly instead of daily returns increases the correlation from 0.1 to 0.4, highlighting the complexity of analyzing hedge fund returns. 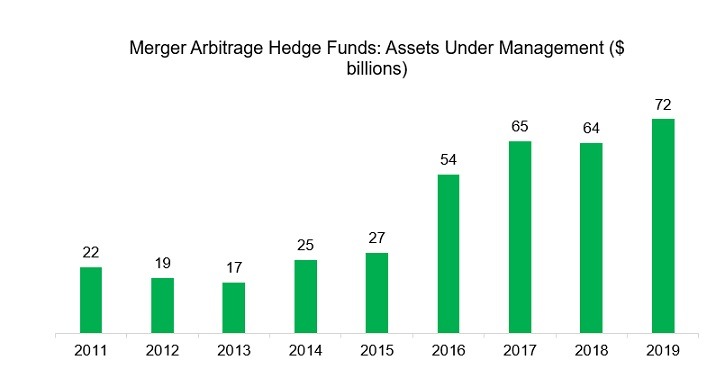 Merger arbitrage is based on investors underestimating the probability of mergers closing, which creates a solid foundation for generating consistent alpha. However, the trading strategy has become well-known over time and seen a large influx of capital, which significantly reduced returns given capacity constraints.

Making things worse for allocators, merger arbitrage suffered during the global financial and coronavirus crisis as deals collapsed, which is exactly when investors are most in need of strategies that offer uncorrelated returns. The use case for a strategy that diversifies in bull markets is far less clear.