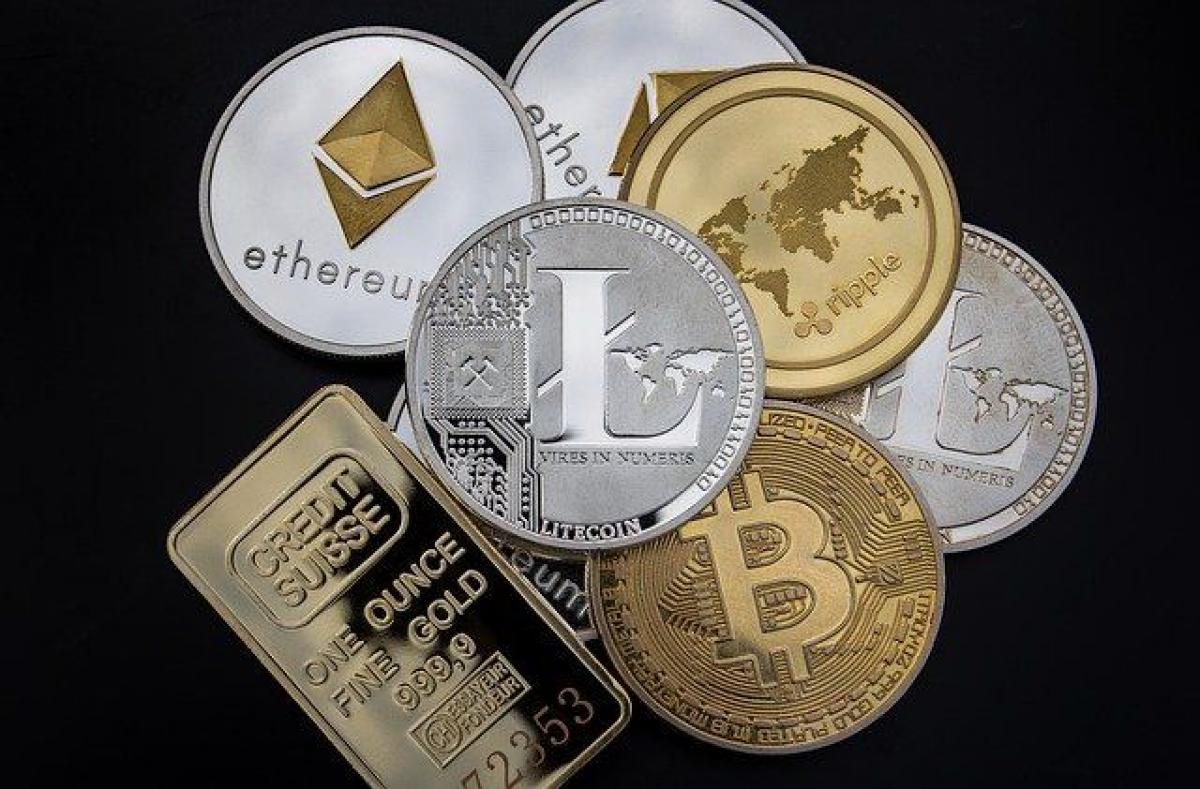 By Andrew Keenan, CAIA, CFA, CBP, Assistant Vice President – Valuation Risk and Control at Credit Suisse Overview The recent release of CAIA Association’s seminal report “The Next Decade of Alternative Investments: From Adolescence to Responsible Citizenship” underscored four key tenets for the investment industry to adhere to and emphasize in the years to come: (1) Commit to Education; (2) Embrace Transparency; (3) Advocate for Diversification; and (4) Democratize to Protect. Of these core principles, the advocation for diversification is especially topical given the recent, jarring bear market that rattled the global financial system following the COVID-19 pandemic. Invariably during periods of market stress, commentators, analysts, and subject-matter experts have commenced the age-old, vociferous debate pertaining to the merits of diversification and whether correlations go to 1 during times of extreme tumult (see the following post for more on the correlation discussion). Moreover, while it is easy to point to the massive run-up in public equities over the past decade as a countermand to the diversification proposition of “don’t put your eggs in one basket”, the aforementioned report makes it viscerally clear that  several key elements such as the low interest rate environment, potential massive funding shortfalls faced by public and private pensions, a trending shift back to cov-lite loans in private markets, and the continued impact from climate change will significantly reduce the likelihood of ergodicity in terms of risks and return, making diversification ever more important. If the emphasis on diversification does indeed roar back to prominence as predicted in the published report, then finding assets and asset classes that can potentially help generate uncorrelated performance or an uncorrelated stream of cashflows to bolster risk-adjusted returns in this new milieu may take—or return—some investors to the hinterlands of the investment space. This research note therefore aims to take inventory on a group of currencies—or individual asset class depending on who you are talking to—that has flown relatively “under the radar” as of late: digital assets, better known as cryptocurrencies. Our objective is to discern whether the inclusion of cryptocurrencies is trending towards serving as a viable alternative for allocators to leverage when attempting to diversify their portfolios and, if so, under what terms does adding select cryptos potentially makes sense? Methodology

Individual Performance Some of the more mainstream cryptocurrencies such as BTC, XRP, and LTC have performed quite well on a stand-alone basis both over a five-year period and for the first third of the 2020 calendar year. As shown in Exhibit 1, the performance over the past five years of these staple cryptocurrencies speaks for itself. SPY (S&P 500) is included for comparison. 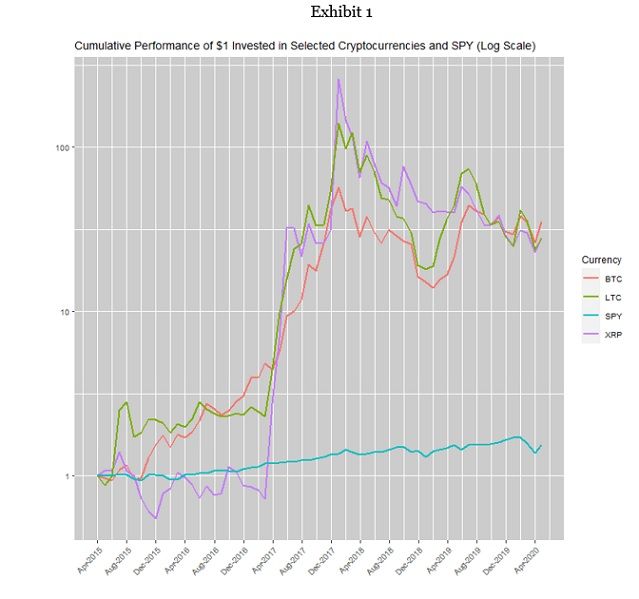 Sources: Coin Metrics, Treasury.gov, and Yahoo Finance Exhibit 2 juxtaposes the relative performance of BTC, XRP, LTC, SPY and summarizes annualized returns, standard deviations, Sharpe Ratios, and performance for the first third of 2020. All three cryptos performed well during the analysis period, with XRP lagging on a risk-adjusted basis. Moreover, from Jan 1, 2020 to April 30, 2020, each digital asset produced a positive return despite the COVID-19 pandemic. Of note is BTC’s performance during the first part of 2020. What are the reasons for such a strong performance? The possible reasons for the 2020 outperformance are myriad but the likely drivers are (1) the anticipation of the May 2020 halving event in which the mining reward for adding a block to the blockchain is reduced from 12.5 BTC to 6.25 BTC; (2) the unprecedented levels of central bank activity aimed at stimulating the global economy to which BTC serves as a “check” on given that it is decentralized; and (3) a spike in demand for “flight to quality” and “quasi flight to quality” investment vehicles. Downside Risk Analysis vs. Public Equities Since standard deviation is agnostic to direction and therefore may not provide a full picture of an asset’s risk, it is imperative to both look at various downside measures for stand-alone investments in cryptocurrencies and to contextualize the said measures against other asset classes. Doing so also allows us to avoid being too tempted by the impressive returns generated by cryptocurrencies.

Exhibit 3 displays various downside metrics and distribution moments such as kurtosis and skewness using monthly returns. For the timeframe analyzed, the results were quite striking on a relative basis: across virtually all measures, each cryptocurrency was shown to be significantly riskier than the S&P 500.  Notable observations include the following:

Correlations: Static and Rolling Because we are assessing diversification potential of various digital assets, we need to look beyond the “excessively high return for excessively high risk” proposition established above. To do this, we look at correlations with equities, fixed income, and alternative investments (hedge funds) but do so from two different vantage points: (1) statically, using fixed correlations for the analysis period as displayed in Exhibit 4 and (2) dynamically via rolling 12-month correlations as shown in Exhibits 5, 6, and 7. 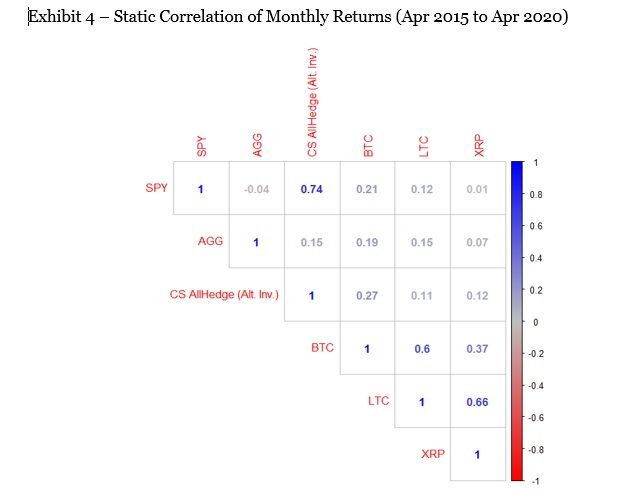 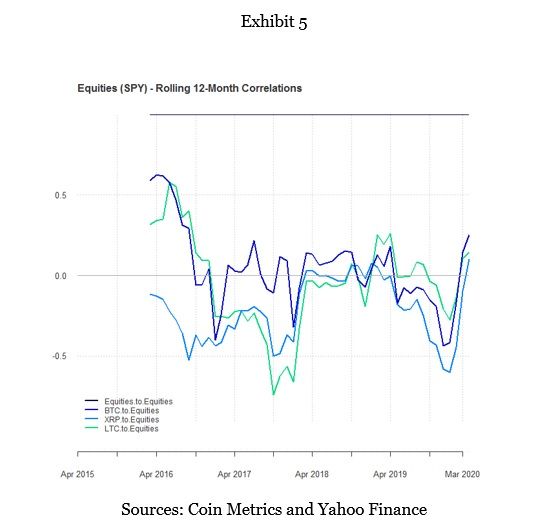 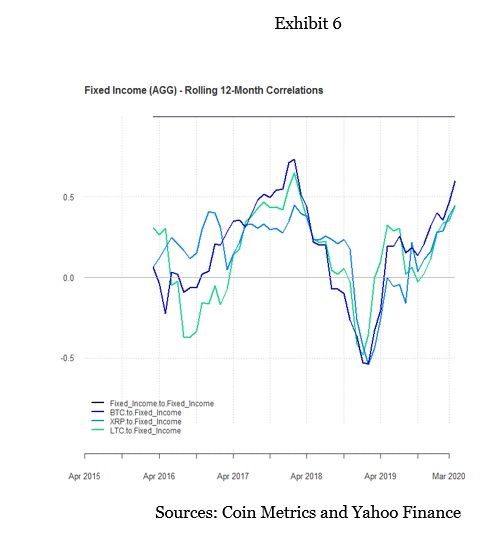 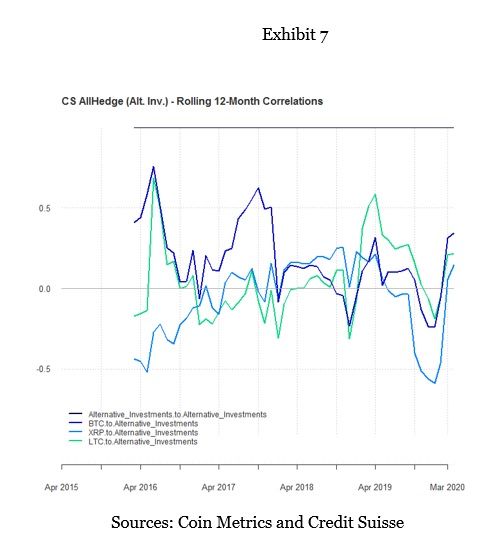 The results here are promising. Observed correlations, rolling and static, provide solid evidence that digital assets could possibly aid in risk mitigation efforts in that correlations tended to be low or negative—with some rolling 12-month time intervals serving as exceptions for all cryptocurrencies analyzed. The likely reason for this is the many elements unique to the cryptocurrency space that drive asset performance and therefore tend not to affect equities, fixed income, or many alternative investments such as adoption rates by merchants and consumers, energy costs for miners, hardware innovations that improve hash rates, regulatory changes, halving events, and hard/soft forks. Putting it all together: Model Portfolio Performances So far, we have established that an investment in even some of the most established cryptocurrencies on a stand-alone basis is the epitome of a high risk/high return proposition. However, the low correlations from a static and rolling perspective with traditional and alternative assets seem to point to possible risk mitigation benefits, potentially justifying a modest stake in an already well diversified portfolio. To dig into our initially proposed question just a little further, we proceed to backtest various permutations of traditional, alternative, and modest stakes of crypto assets. Exhibit 8 displays our 6 model portfolios: a traditional 60/40 portfolio, a portfolio consisting of equities and an equal blend of fixed income and alternative investments, and four well-diversified portfolios that also include either a modest 1% or 5% allocation to a basket of cryptocurrencies. Rebalancing approaches and asset weightings are also listed in the table. Exhibits 9 and 10 show the results of our backtesting analysis. 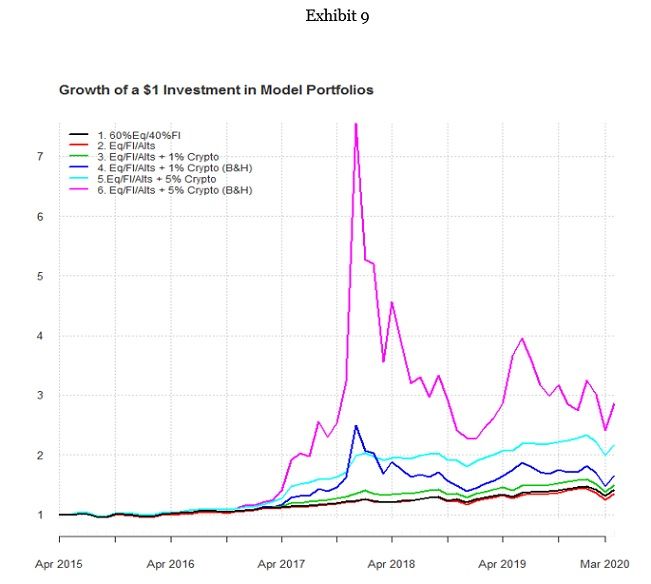 Perhaps the most notable find of our analysis was that adding a basket of cryptocurrencies to a portfolio of traditional assets and alternative investments did not necessarily improve risk-adjusted returns. This is because, when left unchecked without rebalancing, even a modest weight of the cryptocurrency basket begins to vastly exceed its original allocation. Because of crypto’s inherent volatility as a stand-alone asset, their volatility begins to have a disproportionate impact on risk-adjusted returns. Rebalancing helps mitigate the aforementioned effect. Conclusion If there is one thing that 2020 has shown the investment world, it is that this decade will certainly not be like the last. The direct and indirect consequences of the global pandemic coupled with the looming risk factors and trends identified in “The Next Decade of Alternative Investments: From Adolescence to Responsible Citizenship” will very likely re-iterate the importance of having a well-diversified investment portfolio for institutional and retail investors alike. This research note looked at the individual performance of select cryptocurrencies, their downside risk/distribution metrics, and their correlations with other asset classes on a stand-alone basis. We subsequently backtested six model portfolios to discern whether inclusion of cryptocurrencies would improve risk-adjusted returns and if so, under what terms? The main takeaways of this analysis are as follows:

While the cryptocurrencies analyzed are still far too volatile to be considered a viable isolated investment for a vast majority of the general investing population, we saw that that they can help provide diversification benefits under a disciplined rebalancing regimen. More regulation and time are needed for cryptocurrencies’ volatility to stabilize and for their role in the financial milieu to become clearer. However, the digital assets discussed merit a place in the asset allocation discussion and it is worth the time, at the very least, for investment professionals to better understand this emerging financial innovation as well as the diversification and risk mitigation potential of cryptocurrencies. Notes: [i] This research note was an updated and abridged version of a paper on cryptocurrencies submitted to SSRN. [ii] Visuals were produced using R. While Exhibits 5, 6, 7, and 9 appear to end at March 2020 and not April 2020, this is simply a function of the output. A closer look at the trendlines show that they end after March 2020. Unless stated otherwise, the analysis period of this research note was April 2015 to April 2020. Andrew Keenan, CAIA, CFA, CBP is an AVP at Credit Suisse on the Valuation Risk and Control team. Contact E-mail: andrew.keenan@credit-suisse.com