Don’t Get Carried Away by Carry 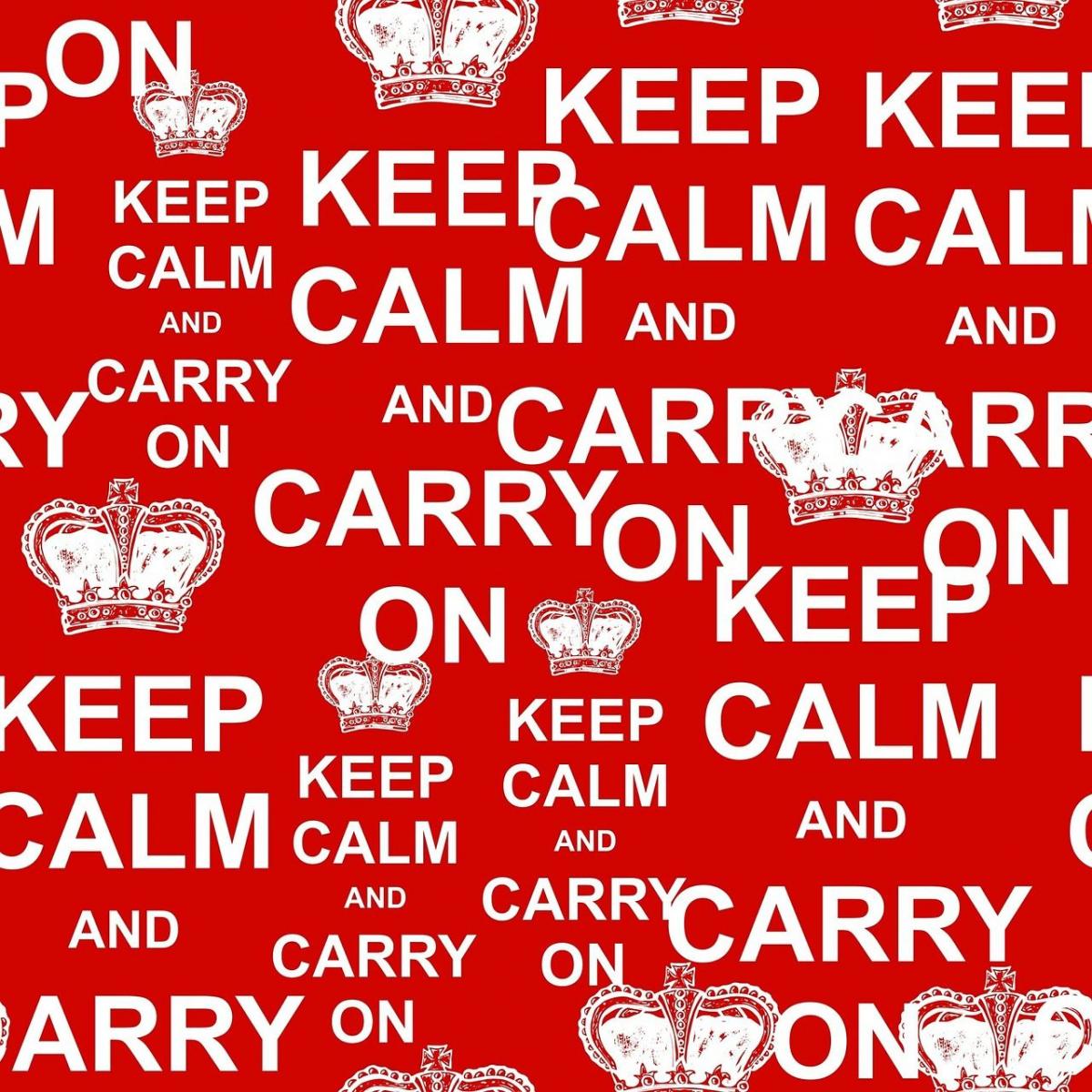 By Nicolas Rabener of FactorResearch (@FactorResearch) INTRODUCTION There are folks in finance who know and folks who don’t know. The latter group often drives the former crazy by abusing terminology. For example, moderators and guests on CNBC talking about momentum and growth stocks as if they were the same thing. Or putting all quantitative strategies indiscriminately into one quant category. Like CTAs and merger arbitrage. Arbitrage itself is probably one of the most misused words in the investment world. The definition is simple: a riskless profit, which unfortunately is almost non-existent, or has been arbitraged away over time. Statistical or merger arbitrage are certainly not riskless strategies, although portfolios are structured carefully to minimize risks. Investors new to capital markets often regard the carry trade an arbitrage opportunity, while more experienced investors have seen how risky this trade can be. Carry is interesting currently as the investment world can be viewed as one large carry trade. Central bankers in the US, Europe, and Japan provide cheap financing via quantitative easing and investors allocate this to risky assets like equities, venture capital, private equity, or real estate. Asset classes without mark-to-market are ideal as losses don’t become apparent quickly. There is also the classic carry trade that borrows in low-yielding currencies like the Japanese Yen, Euro, or Swiss Franc and invests the capital in higher-yielding ones. However, this has become far less attractive in recent years as the spread between high and low-yielding currencies compressed due to a harmonized global monetary policy. In this short research note, we will check in on the livelihood of the carry trade. CARRY ACROSS ASSET CLASSES Although the carry trade is usually associated with currencies, the strategy of buying high-yielding and shorting low-yielding securities can be applied to any asset class. In commodities, the strategy implies buying the most backward dated and shorting the most contangoed assets while interest rates and dividend yields are used in fixed income and equities for security selection. We can analyze the performance of the carry trade across asset classes by using data from HFRX, which aggregates risk premia carry indices from various investment banks by weighting them inversely to their volatility. Most of the indices represent long-short portfolios, so the performance equates to excess returns. We observe that the performance of the carry trade across asset classes was divergent in the last decade, which was especially pronounced in 2020, where carry in commodities generated strong positive returns while the trade crashed in equities. Overall, carry did not offer particularly attractive returns in any asset class since 2010. 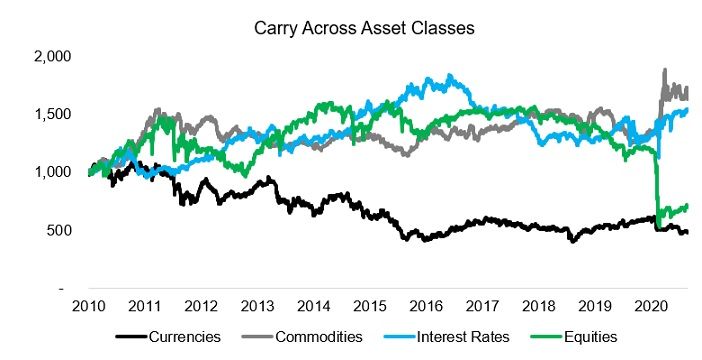 Source: HFRX, FactorResearch CARRY IN CURRENCIES Equity carry crashed by 55% between 20th of February and 23rd of March 2020, which is explained by low dividend-yielding stocks from sectors like technology significantly outperforming high-yielding stocks from sectors like real estate. Investors quickly realized at the onset of the global pandemic that companies like Zoom or Amazon would benefit from locked-down populations while others like shopping center REITs would suffer immensely and even be threatened with bankruptcy. A similar story unfolded during the global financial crisis in 2008, when investors sold off almost all asset classes during a flight to safety, except for US government bonds and other safe havens. The long portfolio of the carry trade at that time consisted of high-yielding assets like emerging market equities and bonds, which underperformed less risky assets like US treasuries or the Swiss franc when the global economy starred into the abyss. However, portfolio construction matters as usual. The HFRX Risk Premia Currency Carry Index includes indices that can allocate to emerging markets, which led to a much larger drawdown (-73%) in 2008 than when restricting the universe to the G10 currencies (-29%), as highlighted by the G10 Carry indices from Societe Generale and Barclays. We also observe that since the global financial crisis the G10 currency trade was more attractive than the broader carry trade, which generated consistently negative returns. 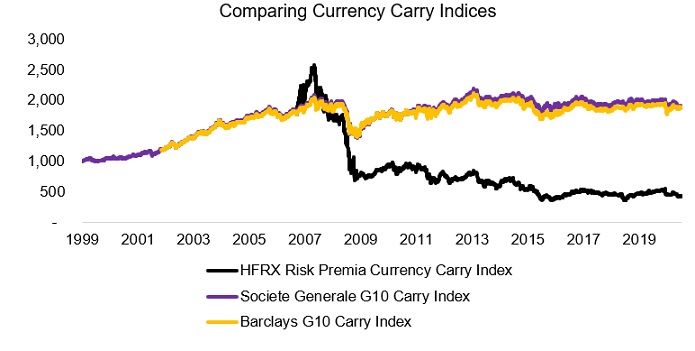 Source: HFRX, Societe Generale, Barclays, FactorResearch WHAT DRIVES THE CARRY TRADE? After working as a quant for a number of years, some relationships become apparent when viewing data in chart form. For example, the plain-vanilla G10 carry trade seems to share a resemblance to the global Value and Size factors in equities, where data is sourced from the Kenneth R. French library. Calculating the correlation between these indicates no relationship, but the trends have largely been the same in the period between 1999 and 2020, which is unlikely a coincidence. Carry and Value portfolios are created similarly by buying cheap and selling expensive assets. In contrast, Size portfolios in equities comprise long positions in small and short positions in large market capitalization stocks. However, small caps tend to be cheaper than large caps, which explains why the Size factor also exhibited the same trends in performance and is frequently highly correlated to the Value factor.

Source: Societe Generale, Kenneth R. French data library, FactorResearch We can show this relationship even clearer by creating an equal-weighted combination of the global Value and Size factors, which looked remarkably similar to the carry trade over the last two decades. However, although the security selection process of focusing on cheap and expensive assets might be similar, the underlying securities are completely different. A current G10 carry portfolio is long the NOK, GBP, CAD, and short SEK, EUR, and CHF currencies via futures, forwards, or swaps, compared to a global Value portfolio in equities that is comprised of mainly long positions in international and short positions in US stocks. Given these different portfolios, what explains the same trends in performance? We’ve highlighted in previous research that the performance of the Value factor is mainly driven by risk sentiment. Cheap stocks represent companies with temporary or structural issues and investors are only willing to invest in these when they are not concerned about the outlook for the economy and markets, which can be measured in various ways. The drivers for the carry trade are likely similar – when do investors feel comfortable enough to allocate to higher-yielding, riskier assets? Arguably when the risk sentiment is low.

Source: Societe Generale, Kenneth R. French data library, FactorResearch FURTHER THOUGHTS 15 years ago hedge funds were popular with institutional investors as they seemed to offer uncorrelated and positive returns. Most investors today have realized or experienced that most hedge fund strategies provide neither uncorrelated nor positive returns and often only represent exposure to systematic factors. Investment banks spotted an opportunity to disrupt the hedge fund universe, similar to how ETFs have grabbed market share from mutual funds, by offering cheap and transparent factor exposure via risk premia indices. Although risk premia indices may be more attractive than hedge funds from a cost and transparency perspective, finding uncorrelated strategies remains a challenge. Intuitively the carry trade in currencies and Value, as well as the Size factor in equities are not related given portfolios constructed from different asset classes, but as highlighted in this analysis, they seem to have the same performance drivers. Investors have to be careful not to get carried away by the same risk exposure. RELATED RESEARCH Value, Carry, and Momentum Across Asset Classes Improving the Odds of Value II Bank Risk Premia Indices: Unbankable?