What About Beta? | The Kudlow Report(s) 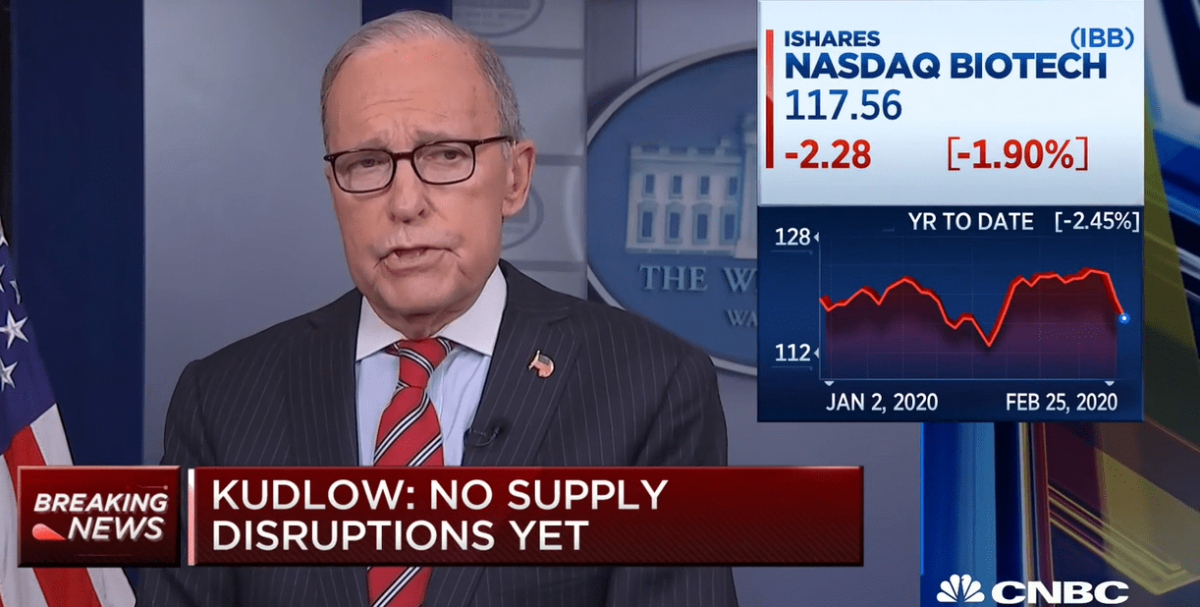 Maybe Howard Marks was right when he wrote about Investing Without People. In that memo he talks about the machine which can largely excel at anything that is quantitative and can be counted: in games like chess and Go, the machine can study and learn moves and plot strategy far beyond the capabilities of even the Grand Masters. However, can the machine best the person he asks, when it comes to the more nuanced qualitative skills such as judgement, personal experience, or the analysis and reconciliation to other disparate inputs, sometimes hiding in plain sight?

COVID19 began in China and quickly spread around the world, but a little hindsight here might just prove the Marks’ Theory when it comes to the behavior of the discerning analyst and the data spat out by the machine. All of that is the subject of the latest installment of the reincarnated The Kudlow Report(s), replete with a cameo appearance of the jester himself, but more on that in a moment.

Prior to any global acknowledgement of a pandemic, most of the world was indeed paying attention to the events in China. The capital markets, however, were seemingly oblivious to the left side of the soon-to-be real “V,” as the S&P 500 was still above the 3,300-level going into the last trading week of February. Meanwhile, back in AI world, the data gathering needed to make discernable judgements was in overdrive. Everything that could be counted was counted even though, in isolation, it might not count at all. Data on food delivery apps in China, road congestion in the large cities, passenger volume on air flights, and coal consumption was gathered and analyzed. The data was indeed big and looked back at patterns over days, weeks, months, and years in search of an actionable investment thesis.

“Investors hunt for alternative data to track coronavirus shock" declared the Financial Times on Feb. 18 when the virus, like Elvis, had already left the building. Yet the analysis of the exhaust left behind is where the focus remained, and the alt-data vendors could not have been more accommodative. The biggest question on the minds of the global banks quoted in this article seemed to be centered on what this meant (solely) for the world’s second largest economy, and how long it would take for China to recover. Hindsight is 20/20 of course, but it is amazing that the focus on China’s dominate role in global supply chains, and the fact they were (and still are) THE supplier of so many other country’s supply chains, especially in the important area of active pharmaceutical ingredients, were mostly ignored or missed altogether; along with the then obvious fact that the possibility of a global pandemic was quite real. Time to cue Send in the Clowns.

While the use of the word clown here might seem to cast aspersions at a current US presidential administration or a certain Director of the National Economic Council, this column will be sometimes sarcastic but always apolitical. In theater, the sending in of the clowns is used as a metaphor to distract when things are not going so well, as in, when the truth is painful why not tell some jokes? The joke in question here, was the juxtaposition of public comments made by Larry Kudlow on Feb. 25 that the virus was contained, and private comments he made to ‘elite investors’ later that same day that maybe it wasn’t going so well after all.

Is this really where we are in 2020??? All this data and the global domain knowledge of the informed analyst on economics, high finance, the interconnectivity of global logistics and supply chains, and the economic and personal devastation of pandemics, but it (supposedly) took the whisperings of Larry Kudlow to take the market down!!! Laughable, sad, or somewhere in the middle, these circumstances prove that the role of the analyst is far from vanquished, and in fact maybe needed more now than ever. Integrate AI, ML and all of that big data, but come see us (not Larry!) at FDP Institute, where fundamentals, judgment, and qualitative analysis will be augmented, but never slain.

Seek education, diversification of both your portfolio and people, and know your risk tolerance. Investing is for the long term.