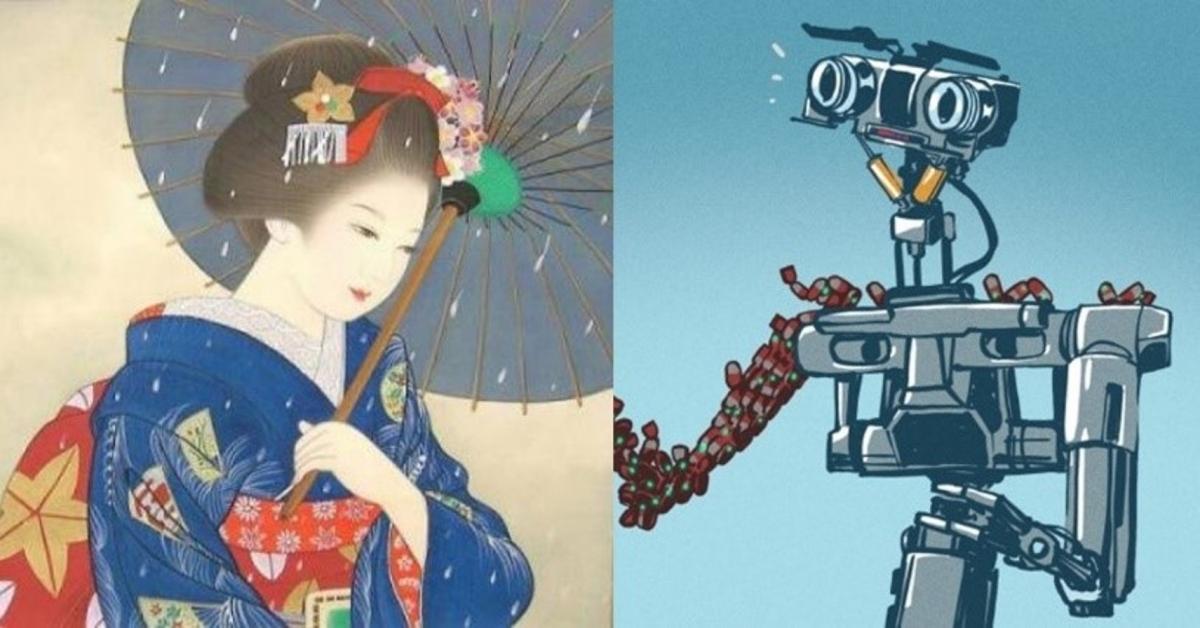 By “culture,” I mean “how a people in a place or organization think, act, or work.”

Some cultural elements positively influence the likelihood of the success of start-up companies. Therefore, venture capitalists would want to know which cultural factors to look for and which to be wary of in a region or country.

Professor AnnaLee Saxenian pioneered the study of cultural impact on venture firms. In her book, she focused on the regional cultures of Silicon Valley and Boston’s Route 128, concluding that their cultures explain why Silicon Valley outperformed the Boston area during the 1980s. Her findings include the following:

Those are descriptions of two different regional cultures. But, what about national cultures? Do they also impact the success of venture firms? To answer that question, I looked into data. My findings are in the next section.

I assume that countries with venture-friendly cultures should produce more unicorns. Here, I define a unicorn as a private company with a valuation over $1 billion. I used CB Insights’ database that contains a list of unicorns. The total value of unicorns in each country can be used as a proxy of the nation’s degree of venture success. I used per capita value to eliminate the influence of population.

I suspected venture activities are affected by income levels. After all, affluent nations have many more rich people who can afford to bet their money on risky ideas. The chart below confirms this. 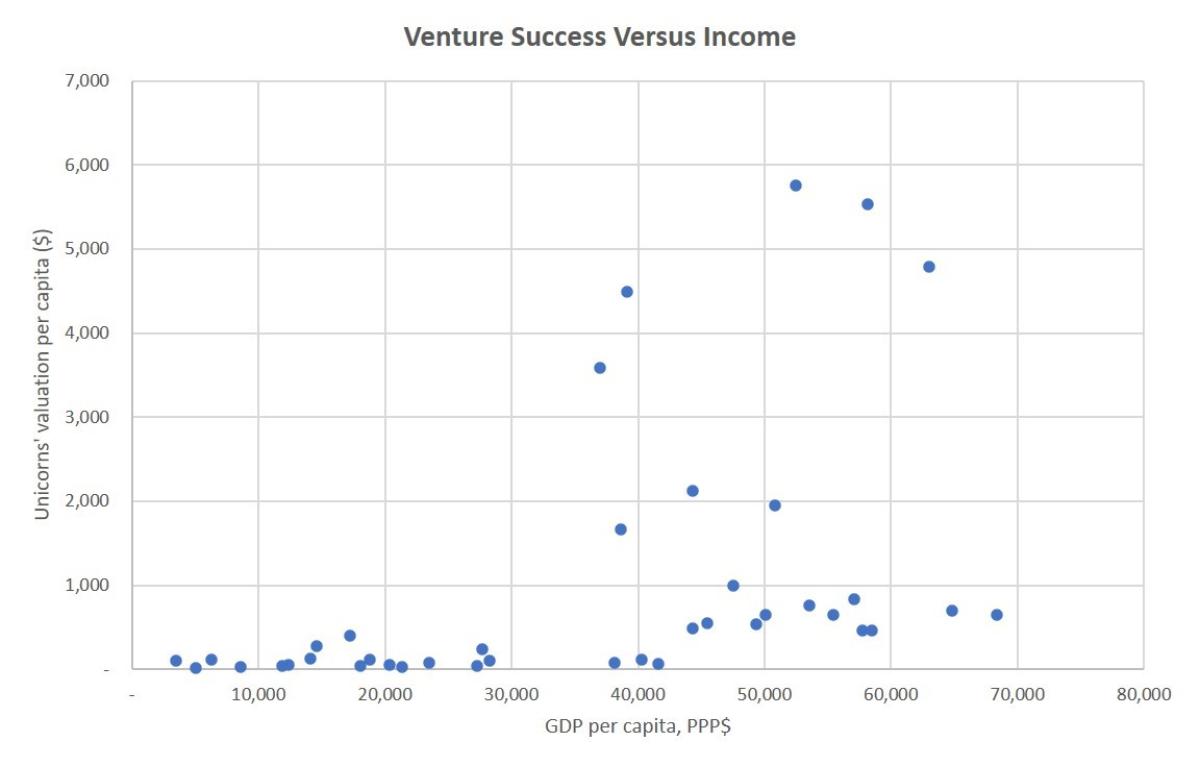 As expected, venture firms do not flourish where the per capita income is below $30,000. Those countries are Senegal, Nigeria, India, the Philippines, South Africa, Indonesia, Colombia, Brazil, China, Thailand, Mexico, Argentina, Vietnam, Chile, Malaysia, Croatia, and Turkey. (Although China and India produce unicorns of massive value in aggregate, their value is small per capita.) More affluent countries – those above $30,000 income levels - show divergence. 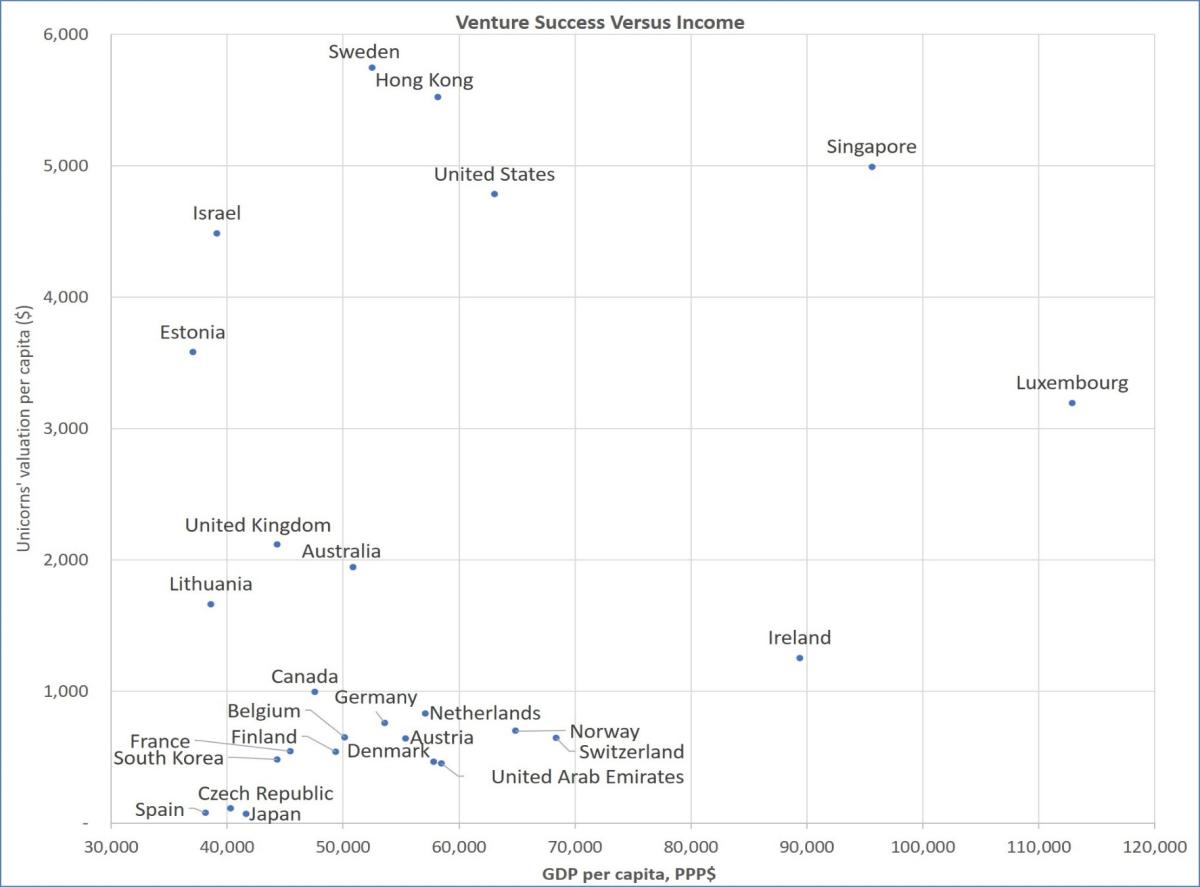 Do cultures explain the variation in unicorn value? To answer that, I used Geert Hofstede’s model of national cultures. His model measures a national culture by six dimensions – power distance, individualism, masculinity, uncertainty avoidance, long-term orientation, and indulgence. These dimensions are defined in his book as follows:

In uncertainty-avoidant countries, people feel threatened by situations or relations that are ambiguous, unknown, or unpredictable. They need to have written or unwritten rules which they do not break. Changing jobs is not popular. They are rewarded for accuracy. Difference means danger.

In uncertainty-accepting countries, people are rewarded for originality. The difference triggers curiosity. Ambiguity and chaos are sometimes praised as conditions for creativity. 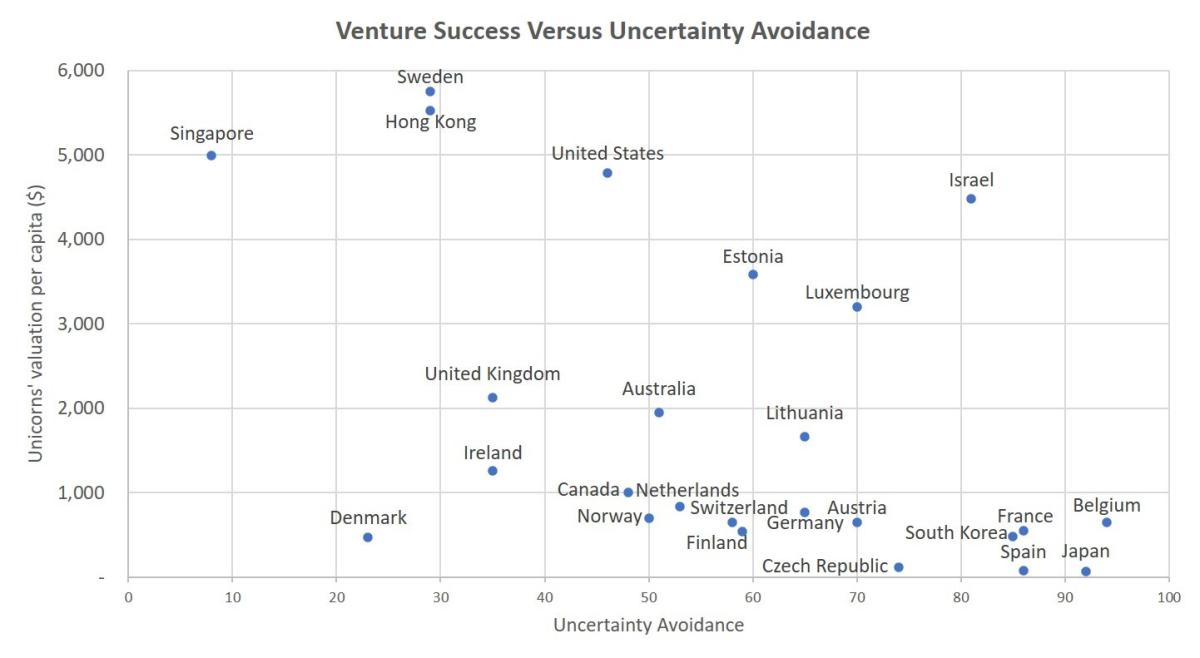 Indulgence stands for a tendency to allow relatively free gratification of basic and natural human desires related to enjoying life and having fun. Its opposite pole, restraint, reflects a conviction that such gratification needs to be curbed and regulated by strict social norms.

Presumably, venture-friendly countries should have the following cultural aspects: lower power distance for the ease of sharing information; higher individualism for encouraging personal initiatives; lower uncertainty avoidance for taking greater risks and producing disruptive innovation; and higher long-term orientation for breaking out of traditions. The role of masculinity and indulgence, however, is not obvious.1

Given the small sample size of 26, I did not do regression analysis. The chart below shows the relationship between venture success and uncertainty avoidance, which seems negative. 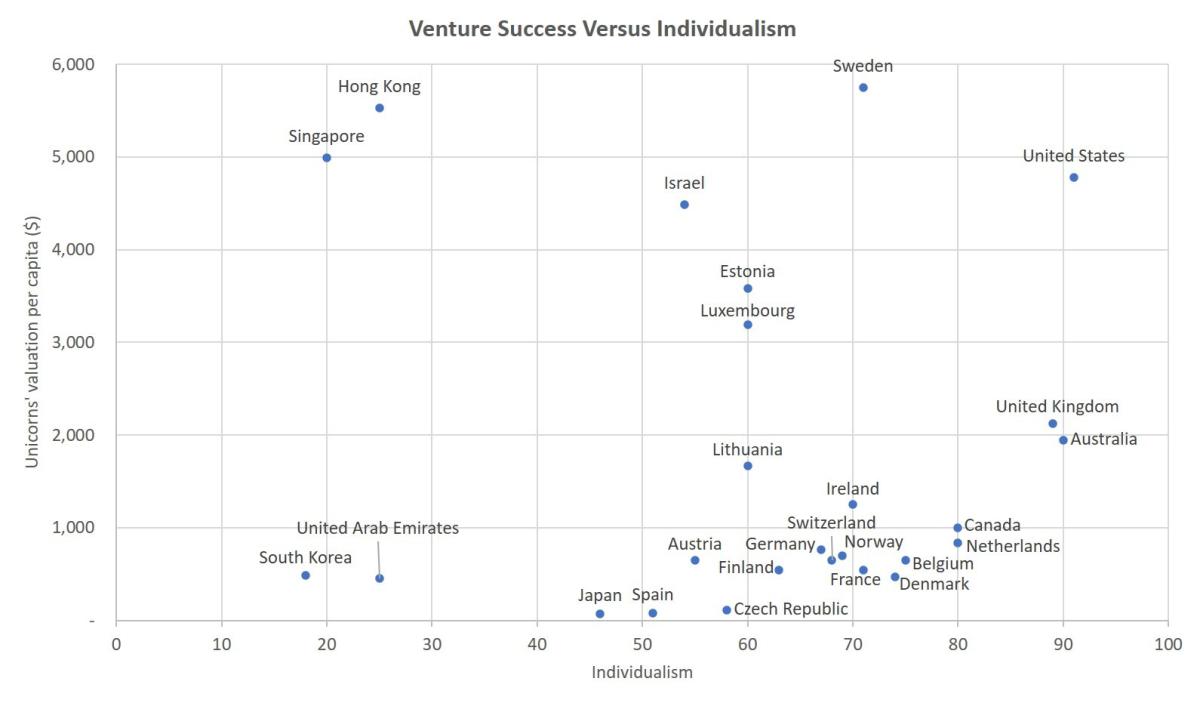 The chart below shows the relationship between venture success and individualism, which seems ambiguous. All you can say is that affluent countries are more individualistic.

The charts for other cultural factors show no clear patterns. 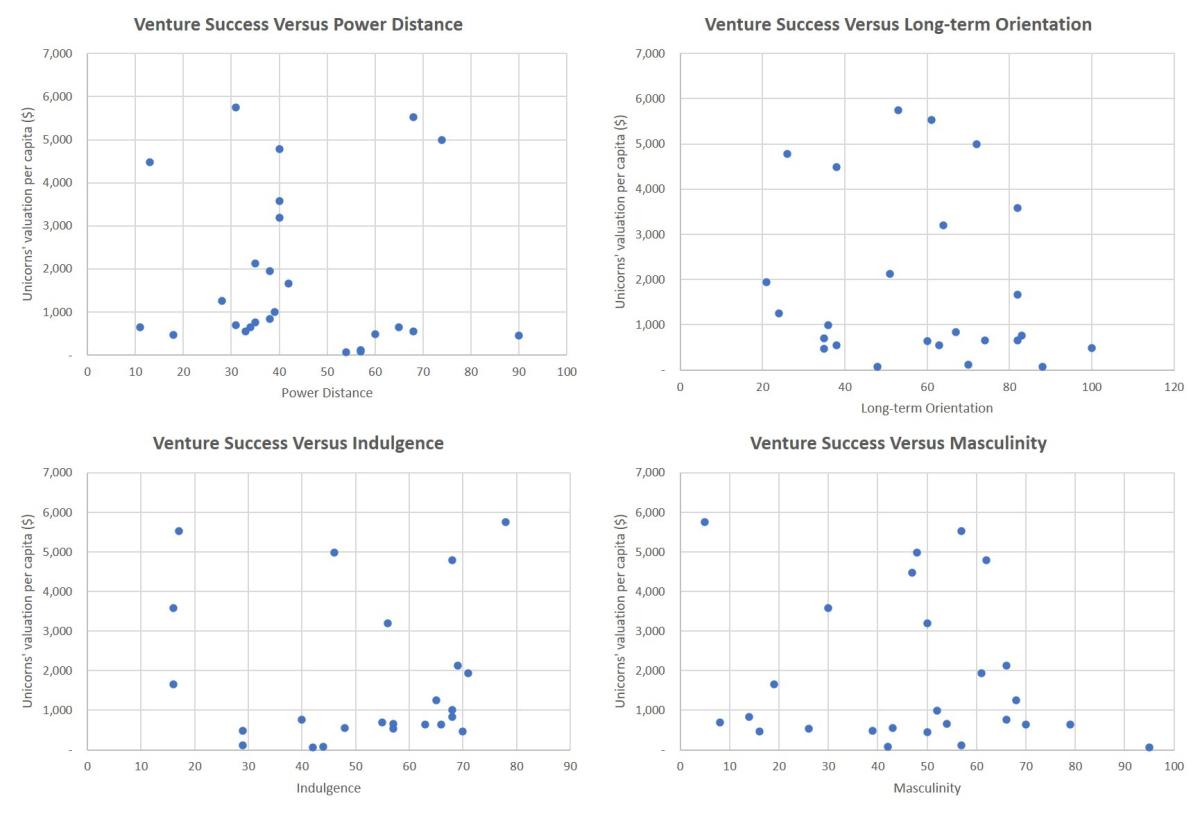 Japan is highly uncertainty-avoidant. A study commissioned by its government concludes that the nation needs to revitalize the economy by creating new businesses and industries.

But entrepreneurs are facing difficulty there; they have a small chance of exit by selling their company to large corporations. According to the same study, large Japanese corporations are typically autarkic and risk-averse. They distrust and disrespect Japanese start-ups, which they believe are run by people who are unemployable by large companies.

With this mindset, large Japanese corporations heavily invest in foreign startups. This creates opportunities for global players, given the nation’s venture capital investment of 2.5 billion dollars in 2019.

Some things don’t change or are slow to change. Cultures are one of them. I believe venture capitalists can exploit cultural gaps–for instance, by selling their stakes to entrepreneurship-starved countries. Like everything else, culture can be arbitraged.

If Ricardo’s theory of comparative advantage holds, everybody is better off if each country does what it does best. I hope this applies to venture capital investment, too.

Note 1. Actually, such correlations were confirmed by studies done by Handoyo (2018) and Espig et al. (2021). Their studies, however, did not focus on venture capital.

Megumi Kimoto is a document translator in Japan. For 30 years, she facilitated communication between the Japanese and people from all over the world, including the US, the UK, France, Luxenberg, Australia, Hong Kong, and Singapore. 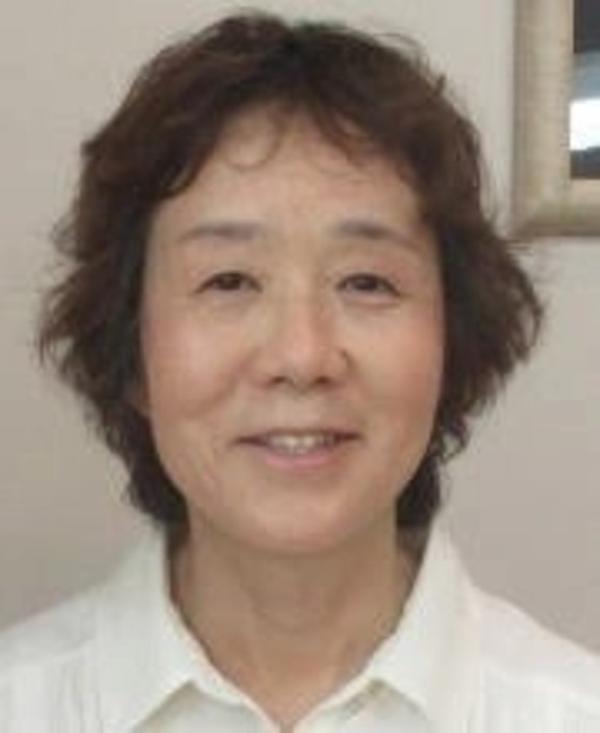 For more about her service, visit https://www.kimoto-alternative-investment-translations.com/