How PE Investing in India Has Evolved 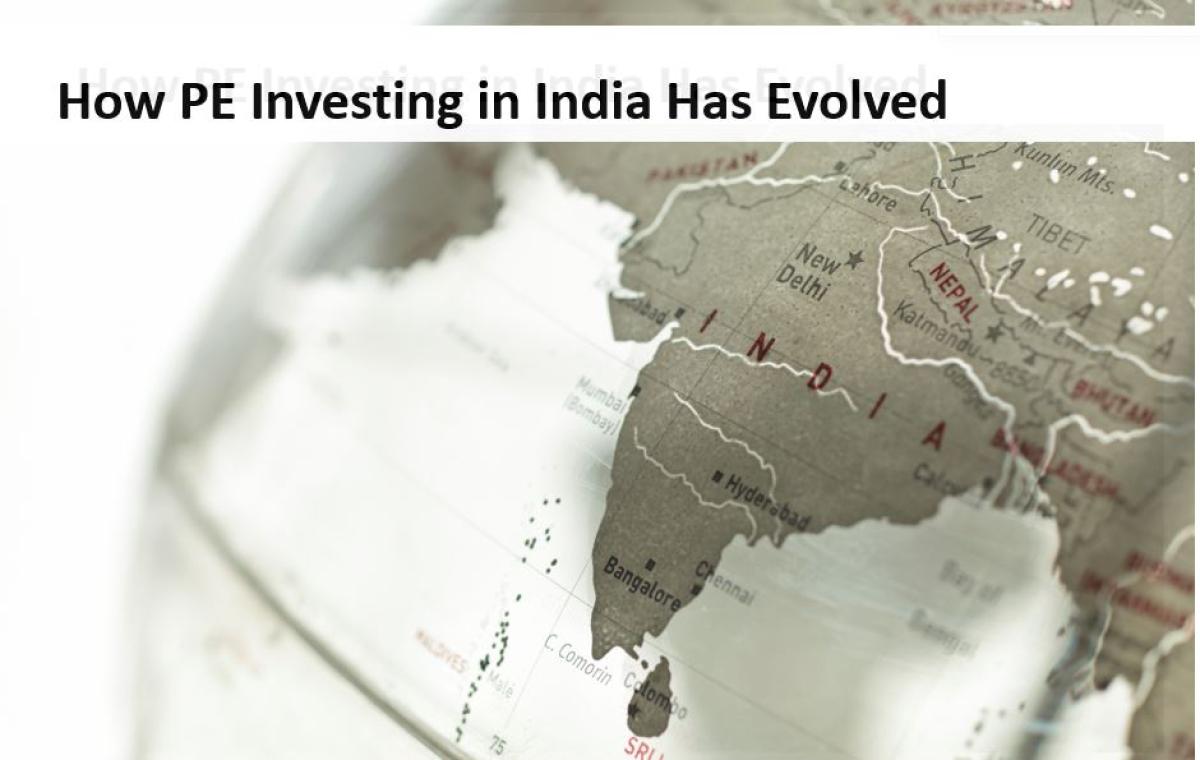 The PEVC industry has emerged as a significant shaper of trends in the Indian economy during the last decade. Today, the largest Indian corporate houses - including Reliance Industries and the Tata Group - have loosened their purse strings to acquire innovative PEVC-backed companies. The public markets are welcoming rapidly scaling startups, and venture-backed startups are making audacious acquisitions of companies that are much older and better established than themselves. 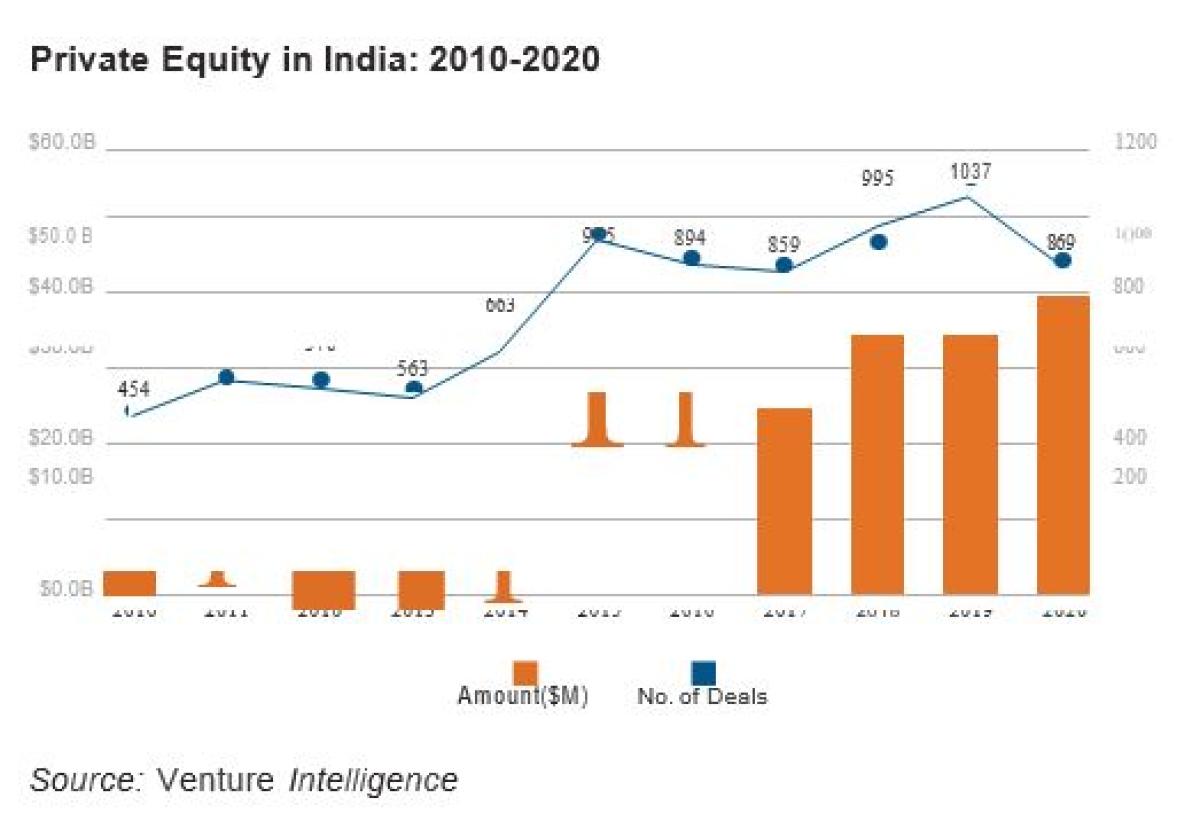 The number of ‘Mega-deals’ (of $100 million or more in value) has vaulted 3.5x - from 17 such deals in 2010 to 60 in 2020. While the onset of the pandemic in early 2020 had a chilling effect on investment activity, the Reliance Industries (RIL) Group stemmed the tide by raising massive amounts of capital across its Jio brand telecom and retail ventures over the next few months. The $9.9 billion raised by the Jio platforms in May 2020 - valuing it at $64.8 billion - catapulted it as the largest ever PE investment in the country. 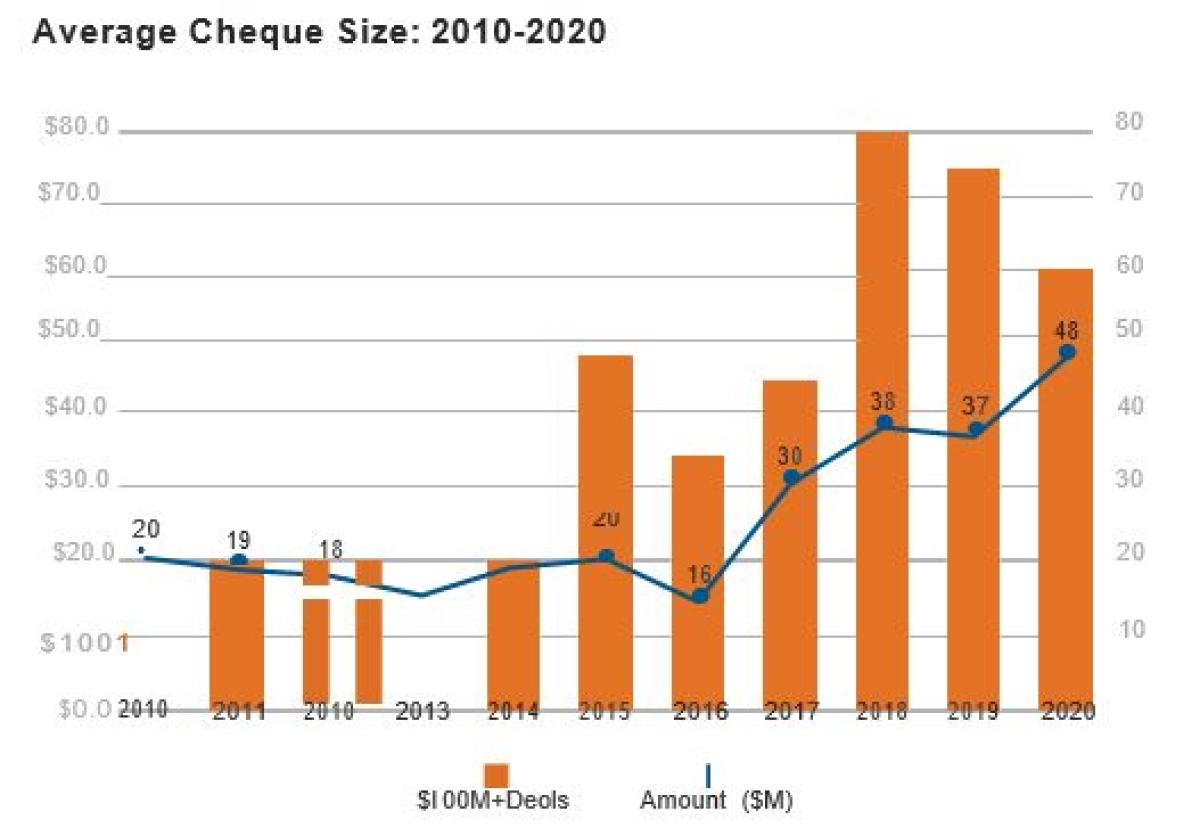 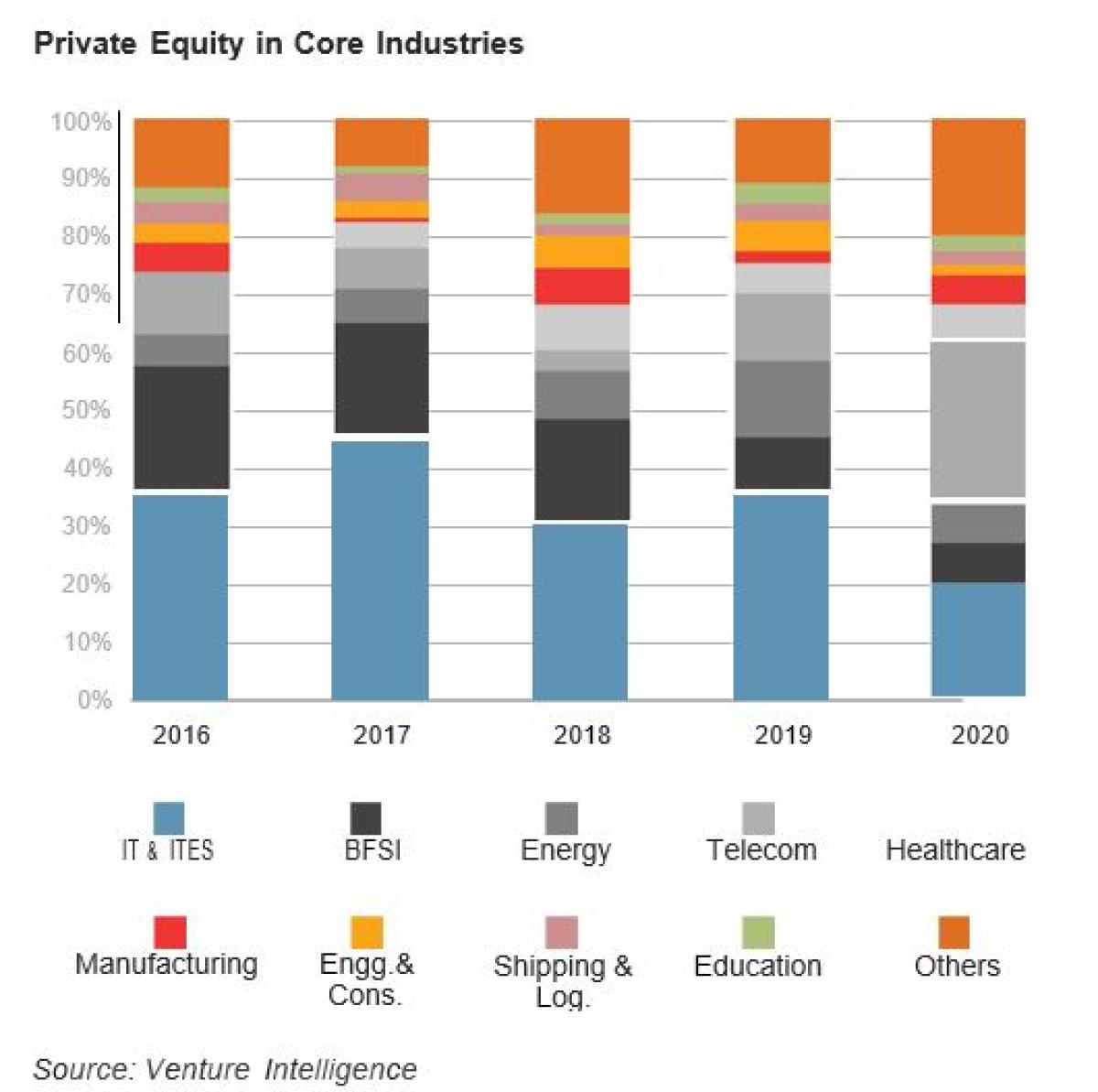 IT and ITeS companies remained the favorite destination for PE-VC investments during the decade - accounting for 30-45% of the pie. The IT & ITeS industry cumulatively attracted around $70 billion worth of PEVC funding, growing at a 25% CAGR. While consumer-driven sectors like e-commerce and fintech saw the start of mega investments in these sectors starting around 2014.

The pandemic - by accelerating digital adoption - has led to a tidal wave of funding for a range of other tech sectors such as edtech as well as B2B sectors including enterprise software and SaaS.

BFSI companies were the next favorite, raising around $28.4 billion during the decade. Investments in BFSI grew at 7% CAGR during the period and hit a peak in 2018, when the sector attracted $6.5 billion. PE investments in healthcare & life sciences companies grew at a 17% CAGR during 2010-2020, with the investment value rising 5x (from $548 million in 2010 to $2.5 billion in 2020). Other core industries that have seen a rise in PE interest over recent years include Energy, Telecom, Engineering & Construction and Logistics.

VC-type investments has also grown significantly over the decade with over $50 billion being invested in the segment over the last five years alone. Led by SoftBank’s $2.5 billion investment in Flipkart in 2017, the period between 2016 and 2020 saw 129 mega-investments, representing close to 70% of the cumulative figure.  The most active VC firms during the period have been Sequoia Capital India (across 175 companies) and Accel India (111 companies). Tiger Global, the New York-headquartered hedge fund investor, has been a key trendsetter in the segment, backing 40% of the more than 50 Unicorns in the country, starting with its ‘make or break’ bet on Flipkart.

E-Commerce has largely defined the success of VC in India over the last decade. Since the landmark year of 2018, which saw the $16 billion acquisition of Flipkart by US retail giant Walmart, the sector has attracted as much as $10 billion. Investor interest initially spread from horizontal e-commerce (like Flipkart and Snapdeal) to transportation and delivery tech startups like Ola, Swiggy and Zomato. The pandemic served to catapult e-commerce to the next orbit, with various flavors including Direct-to-Consumer brands and Social Commerce models attracting dollops of capital. 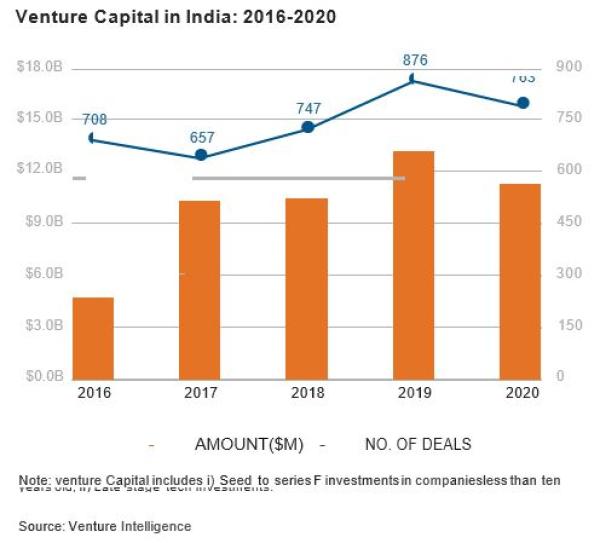 In the second half of the decade, Fintech startups began to find favor, attracting over $4 billion during 2019-2020. India’s startup space saw the creation of 36 Unicorns during the 2010-2020 period, with most of them emerging from the E-Commerce and Fintech sectors. The pandemic changed the fortunes of the EdTech sector, helping it attract massive doses of funding for startups (apart from the already large Byjus) including Unacademy (which turned Unicorn).

"With a massive rise in the availability of capital, it is not surprising that fast growing private companies are seeing a steep elevation in their valuations."

Venture Debt - that is debt provided to venture-backed companies by specialized lenders - came into its own in the last decade, especially the latter half. Pioneered by Innoven Capital (which was spun out from Silicon Valley Bank’s Indian unit) and joined by new firms like Trifecta Capital, Blacksoil and Alteria Capital, these investors lent almost $200 million to VC-backed startups in 2019.

Venture debt represents less than 5% of the VC market in India, but it has large headroom for growth, especially if the Indian ecosystem evolves similarly to the US, where the share of Venture debt funding may be as high as 15%.

With a massive rise in the availability of capital, it is not surprising that fast growing private companies are seeing a steep elevation in their valuations. Among the ‘pure play’ internet companies, Info Edge - which operates multiple online brands led by jobs listing service Naukri.com - chose to go public on the Indian stock market as early as 2006. The company’s stock price, after staying in the INR 150-200 zone until 2010, has rocketed over the last decade to over INR 5,000 (providing it with a market capitalization of over INR 66,000 crore).  Need $ numbers

Three of Naukri’s peers from the 2000 era – marriage services-focused Matrimony.com and B2B listings-focused Justdial and IndiaMART - went public over the last decade, after demonstrating a track record of profitability. With Zomato successfully embarking upon an IPO in July 2021 and other startups set to follow, it will be interesting to see how the domestic markets treat these fast growing – but loss making - ventures. 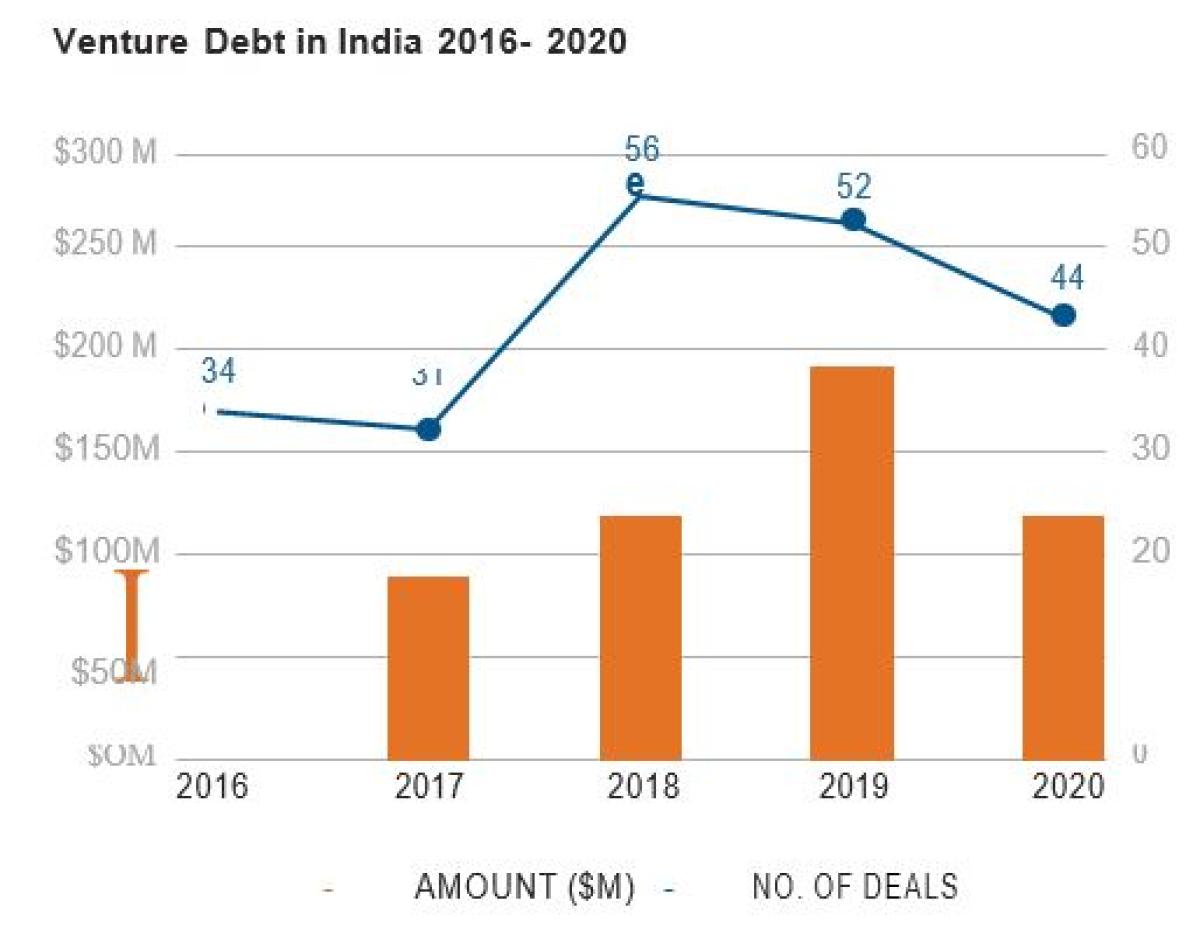 From a revenue multiple perspective, InfoEdge, Matrimony, IndiaMART and JustDial have tended to trade in the 10-15x range. The valuation of privately held B2B unicorns are also pegged in this range. Mature private companies in the B2C segment however seem to enjoy a premium, with their revenue multiples sitting in the 15-20x range.

Younger private companies, who have turned unicorns in less than 5 years (including Groww, Cred and Unacademy) are clearly not being valued on historic financial performance (which would put their multiples near 100x), but are based on tailwinds witnessed on the back of the pandemic as well as their future growth potential.

PEVC firms registered 1,261 exits from Indian companies, harvesting $67.5 billion during the five years 2016-2020. Of this, $31.6 billion (across 708 deals) represented complete exits from the portfolio companies (about 47% of the total value), with the remaining being partial exits ($35.9 billion) across 553 deals, representing 53% of the total. 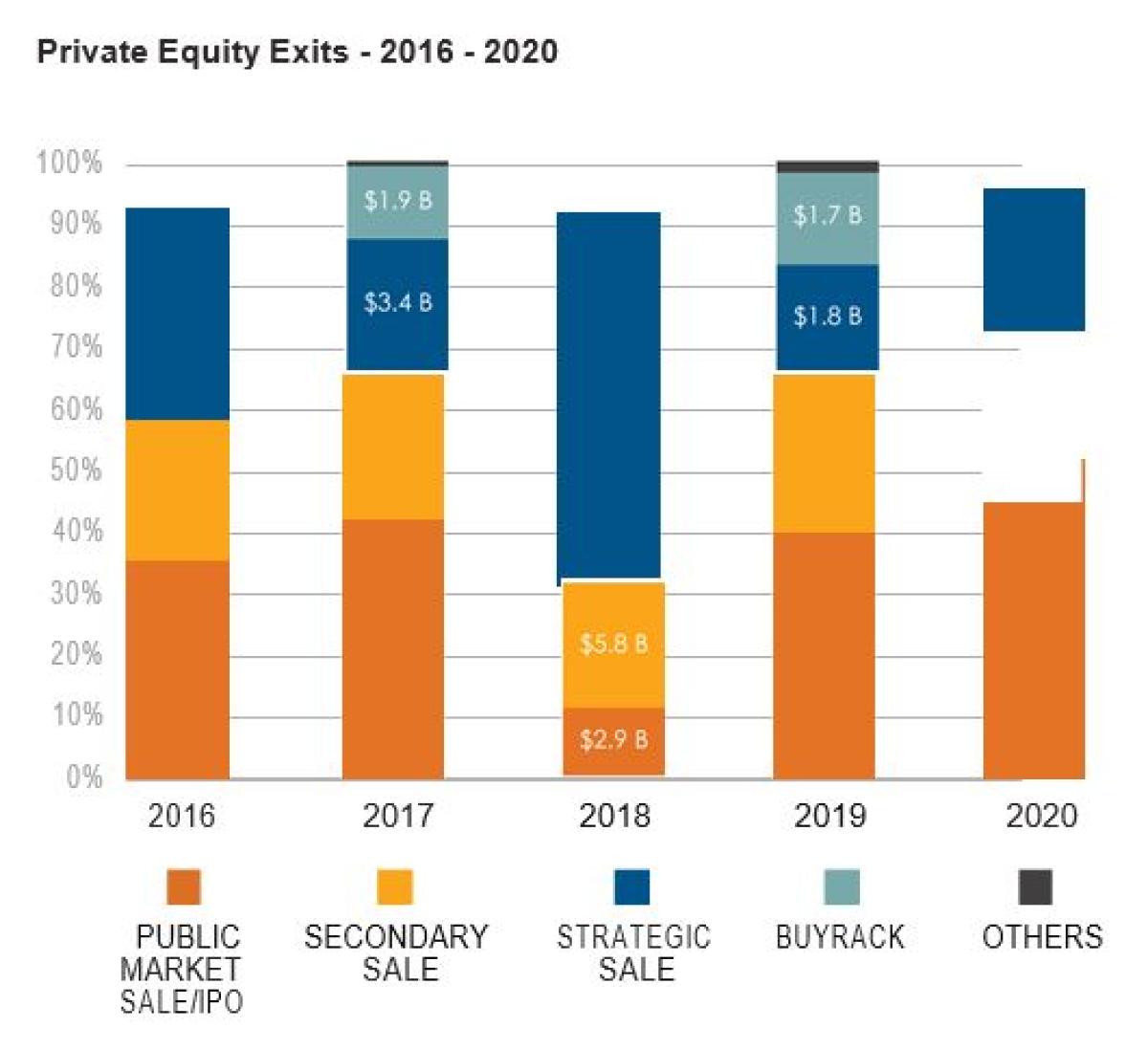 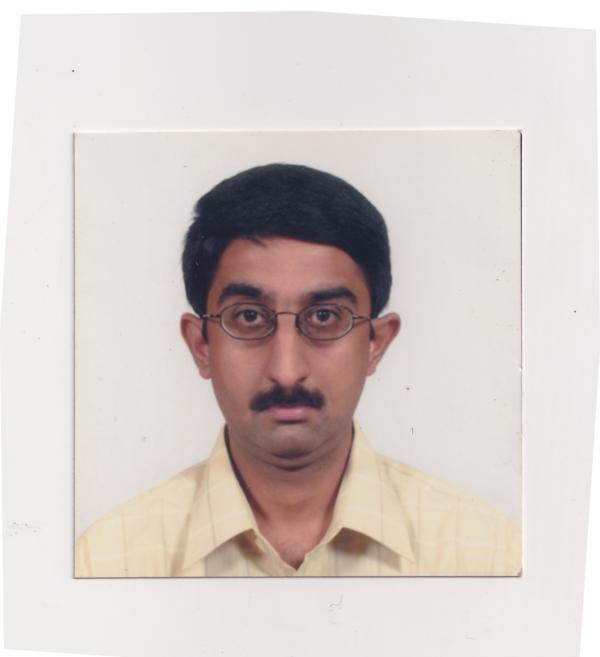 Arun has over 20 years of research and media experience. Before founding Venture Intelligence, he had worked asa Senior Research Analyst with The Hindu­ Business Line, a leading Indian business daily. Arun has a B.Tech (Chemical Engineering) and PGD (Financial Management).