The Dead vs. the Living Stocks 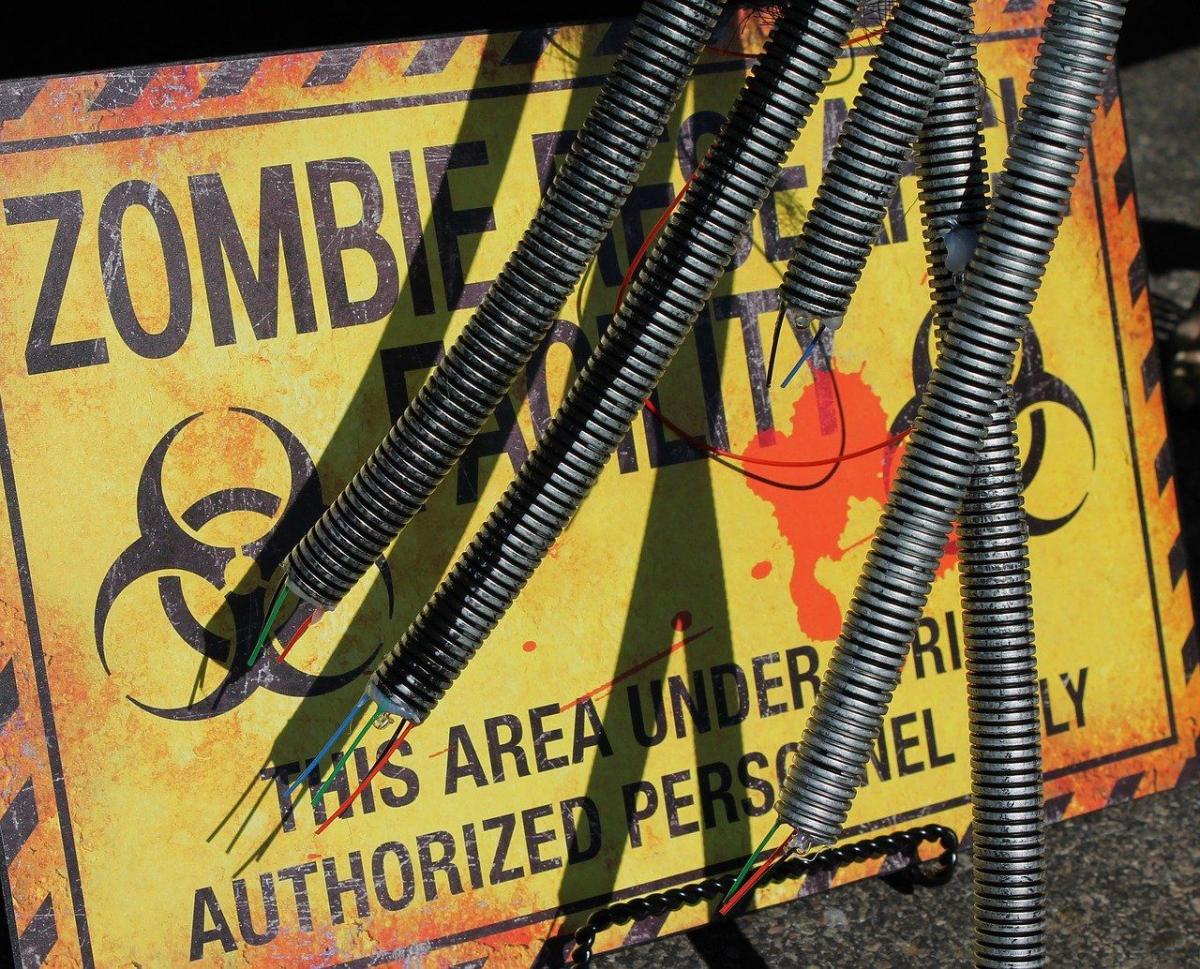 By Nicolas Rabener of FactorResearch (@FactorResearch) INTRODUCTION Walking through financial centers like London or New York in the spring of this year felt in many ways like being a zombie movie. Shops were boarded up, restaurant and cafes closed, and office towers unoccupied. The few people walking outside were quick on their journeys and keen to avoid any human contact. Food was getting scarce. Fortunately, the COVID-19 virus does not turn humans into zombies, although the same can not be said about companies. The topic of the zombification of the global economy has become a more frequent topic this year as many companies are being kept alive by government subsidies. The topic of an economic zombification is not new and has most often been discussed in the context of Japan, where the banking industry was allowed to survive after the stock and real estate markets crashed in 1989. The banks carried large mortgage books that, had they been written down, would have made these institutions insolvent. However, the Japanese government was not in the mood to let that happen, similar to how governments currently are unlikely to let entire industries falter, even if they are not fit for a post-COVID-19 world. Think travel operators, airlines, shopping centers and office landlords, entertainment businesses, and so on. In this short research note, we will explore the current state of the zombification of stock markets across the globe as this is bound to change dramatically over the next few months and years. More zombies will emerge, and they will haunt the living. THE MOST ZOMBIFIED STOCK MARKETS Zombies in movies are much easier to spot than in the corporate world. A human zombie is essentially a deceased body that magically still functions and is driven by the need for fresh human flesh. It neither looks pretty nor smells particularly well. In contrast, a corporate zombie often seems to be indistinguishable from healthy companies, except that its financial situation will likely require a restructuring or bankruptcy filing at some point. It is more dying than dead. Zombie stocks can be identified in various ways and we will use the interest coverage ratio (ICR), which is defined as EBITDA over interest. If the ICR is below one, then this means the interest payments are not covered, which is not a sustainable situation for a company, at least not historically. We exclude financials from this analysis as EBITDA is not a sensible metric for companies where interest income is a core revenue component. Our analysis comprises more than 12,000 stocks from 40 stock markets globally and excludes companies with market capitalizations below $250 million. There are likely to be many zombies roaming below that threshold, but these are largely irrelevant for investors given their low liquidity. Those smaller zombies are likely to disappear faster because, being smaller, they will not attract the kind of resources or support from governments to keep alive for long periods of time. We calculate the percentage of stocks with an ICR below one and observe that the list of the top 10 most zombified stock markets includes countries from all continents and developed as well as emerging markets. There does not seem to one unifying theme that ties these markets together. The following observations come from the first chart:

Investors might question why Japan is missing on that list, but most Japanese companies are in a rather healthy financial shape due to an export-oriented economy and cheap financing that has been available for almost two decades. In fact, there are many Japanese stocks that have more cash than debt. The frequently discussed Japanese zombies are large, but few in numbers, and mostly from the financial sector. 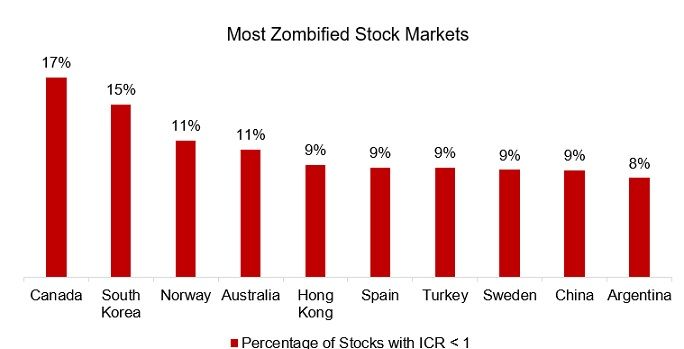 Source: FactorResearch MOST ZOMBIFIED SECTORS As an alternative to measuring the zombie infection by geography, we can also view this from a sector perspective. The picture that emerges is that the new economy as represented by the technology and communication sectors is worse infected than the old economy. It is worth noting that the high percentage of zombie stocks in the health care sector is explained by a large number of biotechnology companies that are unprofitable for years before they start generating sales, or until they go under and die the true death. These biotech companies are not zombies in the sense of humans turned monsters, they are rather unproven companies that are working hard to reach financial viability. These companies are almost like lottery-tickets given that, as our analysis shows, existing fundamental lenses do not explain correctly their values. Perhaps most surprising is that the energy sector is relatively healthy, despite a low oil price in recent years that has been challenging for many energy companies. 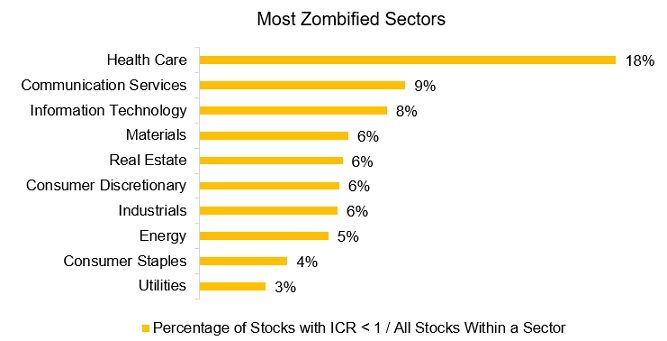 Source: FactorResearch DISSECTING ZOMBIE STOCKS Analyzing the financial health of the dead versus the living results in an intuitive picture: zombie stocks have worse operating margins, lower returns on equity, and lower sales as well as earnings growth, compared to stocks with an ICR above one. However, the debt-to-asset ratio of zombie stocks was lower than that of non-zombie stocks, which is likely explained by the sector biases, specifically the overweight to the healthcare sector. Many of these emerging biotechnology companies might be unprofitable, but for this reason, they are unlikely to be highly leveraged as they do not tend to get access to debt financing easily. An alternative explanation is that lenders might be unwilling to lend to companies in a persistent zombie state given that whatever support is keeping it afloat might be taken away based on changes in political winds. 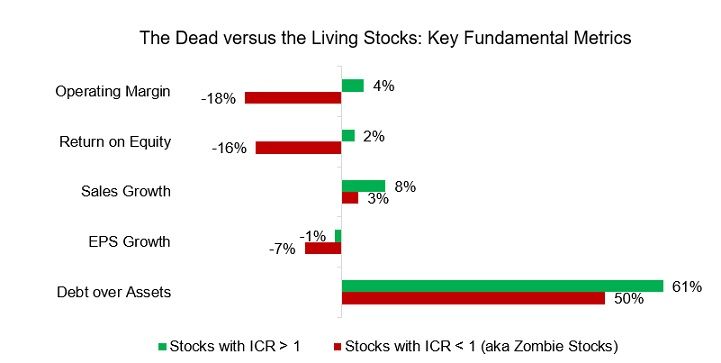 Source: FactorResearch Given the poor financial health of zombie stocks, at least when measured on income statement and cash flow metrics, investors likely assume these to be more volatile and poorly performing compared to other stocks. Although this is true for volatility, the dead outperformed the living stocks over the last 12 months. Bill Sharpe would be proud to know the basic tenets of CAPM extend to zombie companies. The performance is calculated using the median and the discrepancy in performance would be even larger when utilizing the average, which suggests that a few zombies generated outsized returns. In most zombie movies there is no cure that reverts humans back to life, but certain corporate zombies can relatively easily get cured and join the ranks of the living. For instance, think of a small biotech firm that makes a breakthrough and seals its first revenue-generating deal with a larger pharmaceutical player, which is typically rewarded handsomely by shareholders when that happens. 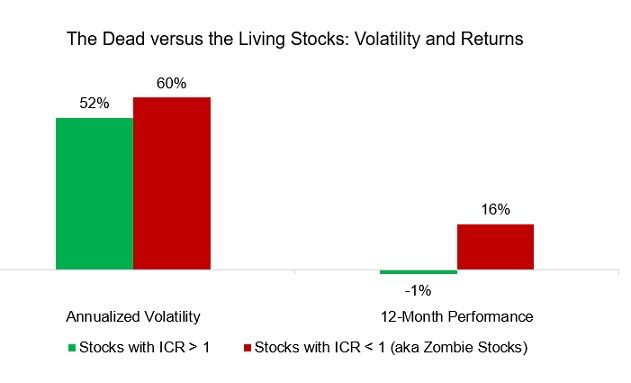 Source: FactorResearch In addition to zombie stock returns being more skewed, their better performance over the last year might also be explained by the sector bias towards technology and communication stocks, which fared better in the global pandemic than sectors like real estate or industrials. We can partially verify this by looking at the valuations, which highlights higher median price-to-book and price-to-earnings multiples for zombie stocks. Turns out, the dead do not come cheaply. Not even here value works. Ouch. 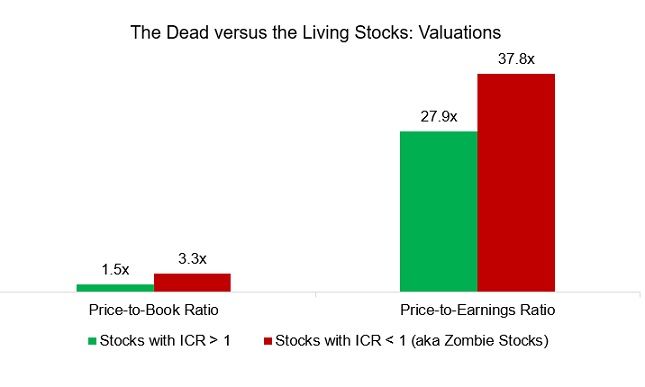 Source: FactorResearch FURTHER THOUGHTS Dealing with zombie companies is like dealing with any problem, e.g. a significant-other that is no longer loved, a garden where weeds are creeping in, or becoming overweight. The longer the problem is allowed to fester, the worse it tends to get. Naturally, there is nothing problematic about biotechnology companies being unprofitable for years as they are investing in research and development. However, companies that are structurally and persistently unprofitable like many European banks should be viewed more critically. Providing these with financing, especially if only for political reasons, is simply a misallocation of capital that does not create long-term economic growth. Once a zombie is spotted, regardless if human or corporate, better deal with it quickly. They tend to infect others. RELATED RESEARCH Creating Anti-Fragile Portfolios The Rise of Zombie Stocks